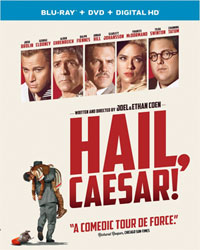 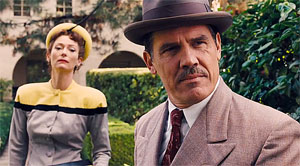 Whenever a brand new movie made by the Coen brothers, you simply know that you’re in for something special. You just know that in a new movie made by the brothers that the plot always ends up with their characters an outrageously huge mess, predicated by a hilariously idiotic cast of characters, brought to life by an unequivocally impressive set of actors. It’s a tradition if I may say so myself, and that tradition has certainly been handed out once again in the new movie, “Hail, Caesar!”, by Joel and Ethan Coen.

I don’t want to spoil the entire plot for you, but the plot revolves around a day in the life of 50s movie studio manager Eddie Mannix, played by Josh Brolin. Bombarded with all sorts of problems and issues, Mannix is trying to keep his little empire together and moving forward, while also having to deal with day-to-day problems such as trying to keep an actress’s pregnancy under wraps, casting a misfit star in a formal drama, and discovering that one of his biggest stars, actor Baird Whitlock (George Clooney) has disappeared without a trace. As if all the drama weren’t enough, he also has the press on his heels in the form of the Thacker sisters (Tilda Swinton), who have a penchant for sniffing the floor and digging up dirt for their sensational tabloids. 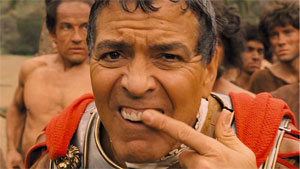 While all of this may seem like a lot going on, let me assure you, though, that this is only scratching the surface of the movie’s full story, which is larded with subtext and thinly disguised references to real occurrences and personalities. It makes for wonderful entertainment by itself and certainly conjures up the glamor of bygone Hollywood days, but, like in Tinseltown, it is not all gold that glimmers and the film does have its share of problems. 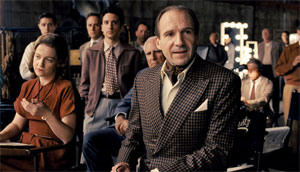 “Hail, Caesar!” is by no means a bad movie, though the brothers are not nearly at the top of their game here. It is, perhaps, more a problem along the lines of the movie being unorganized. What I’m trying to say is, that this movie is fun and highly entertaining, and serves as a good example of the Coen brothers’ ability to orchestrate a laughable “flustercuck” [sic] of a plot, the movie varies too much and leads itself astray. It feels almost as if each sibling had their own grand ideas for the movie, but they weren’t able to tie them all together properly, creating a somewhat disjointed narrative and flow. I am not kidding you, the movie just goes everywhere, and what is perhaps most disappointing is the lack of a real pay-off in the end, to wrap it all up. It is all just extremely incohesive. The introduction of musical numbers, for example, that suddenly threaten to turn the film into a musical at the halfway mark, perfectly illustrate the lack of focus and how irrelevant elements water down the flow and serve more as roadblocks than story events propelling the plot forward. 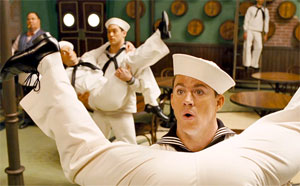 Don’t get me wrong, though, as I’ve said, it’s not really a bad movie, especially if you like the Coen brothers’ modus operandi. “Hail, Caesar!” got a few really good laughs out of me, supplemented by decent acting and wonderful, golden-era cinematography, and it features a wide array of actors; Featuring, of course, recurring Coen collaborators George Clooney, Tilda Swinton, Josh Brolin and Frances McDormand, as well as Scarlet Johansson, Ralph Fiennes and Channing Tatum, along with the grossly overlooked Alden Ehrenreich.

The Blu-Ray version offers up a pristine presentation of the movie in 1080p high definition with a solid audio track that perfectly complements the movie, without being obtrusive or excessively effects driven.

The Blu-Ray version also features a DVD copy of the movie, along with a digital copy for you to watch on the go. 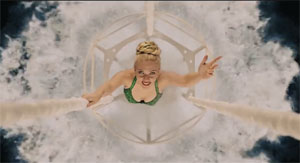 The supplemental side of the release is a bit thin, however, with only a few featurettes exploring the background of the movie and its production, all of them noticeably promotional, giving off the impression of EPK material rather than insightful behind-the-scenes additions.

All-in-all, “Hail, Caesar!” is admittedly a bit of a wrecked train, but when you pluck through the ashes, there are a good number of redeemable qualities to be found that truly make up for its crippled plot, and it is definitely a love letter to Hollywood’s Golden Era. If you’re a fan of the Coen’s work or just a fan of old-time Hollywood, give it a shot and see for yourself. You might actually enjoy it, despite its flaws.