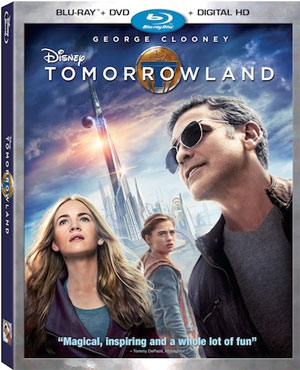 Dreamers Wanted…Disney invites you to an incredible world of epic imagination where anything is possible.  Buckle your seat belt, as the director of “The Incredibles” takes your family on an action-packed thrill ride.

Join former boy genius Frank (George Clooney), optimistic, science-minded teen Casey (Britt Robertson), mysterious Athena (Raffey Cassidy) and the brilliant David Nix (Hugh Laurie) in a world of pure Disney imagination.  Tomorrowland transports you on an inspiring and magical journey of wonder and adventure to a place where if you can dream it, you can do it.

The DVD version will contain the Brad Bird Production Diary Entry ”NASA”, as well as the Blast from the Past Commercial.

The Blu-Ray version will be packed with extras, including the full Brad Bird Production Diaries, consisting of ”The First Day,” “Tomorrowland vs. the Weather” and “NASA”.

Also included are the Featurettes ”Remembering the Future: A Personal Journey Through Tomorrowland with Brad Bird”, which allows you to discover everything there is to know about the making of “Tomorrowland” through Director Brad Bird’s perspective. In ”Casting Tomorrowland” you can join Brad Bird, Damon Lindelof, George Clooney, Hugh Laurie, Britt Robertson, and Raffey Cassidy as they discuss the making of the film, while in ”A Great Big Beautiful Scoring Session” composer Michael Giacchino invites Disney legend, Richard Sherman to join him in an informal visit to the “Tomorrowland” scoring stage, told through the personal lens of Michael’s brother, documentarian Anthony Giacchino.

”The World of Tomorrow Science Hour” is hosted by futurologist David Nix, taking a look at the real science behind the film.

The Animated Short: The Origins of Plus Ultra will also be included on the release, as well as the Blast from the Past Commercial and Deleted Scenes with Filmmaker Intro.