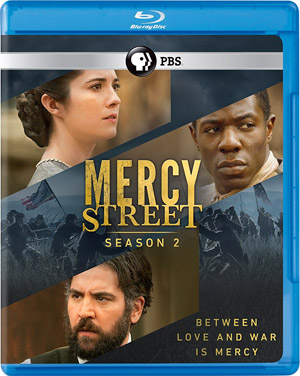 PBS Distribution has just added Mercy Street: Season 2 to its roster, scheduling to release the acclaimed television show on Blu-Ray Disc and DVD in February.

The second season of “Mercy Street” picks up directly from the dramatic events at the end of the first season’s finale, continuing to explore life in the chaotic city of Alexandria, the complicated interpersonal dynamics of Dr. Foster, Nurse Mary and the Mansion House staff, the increasingly precarious position of the Green family and the changing world of the burgeoning black population. The second season will introduce a number of new elements, taking the viewer closer to the war and into the halls of Confederate power, all set against the intensifying war, starting with the Seven Days’ Battle and culminating with Antietam.

The new season also delves deeper into the lives of newly freed African Americans, exploring – among other areas – life in a contraband camp, where formerly enslaved African Americans are forced to confront horrific living conditions and disease, but also get a glimpse of freedom.