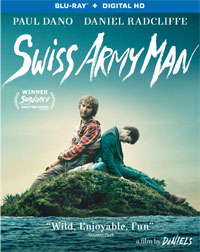 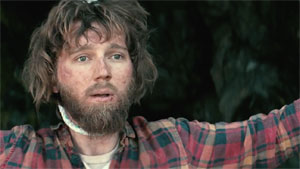 I’m sure many of us moviegoers are aware of the weird path that famed actor Daniel Radcliffe has been going down for some time now, ever since finishing the Harry Potter series, as he appeared in numerous performances that can only be described with the word “offbeat.” Whether it’s his taking up the role of a seventeen-year-old attracted to horses in the contemporary performances of the stage play “Equus, ” or starring in the ridiculously bloody, dark television comedy series, “A Young Doctor’s Notebook,” you can really tell, that he tries to challenge himself and the public perception of him after the celebrity circus surrounding the Harry Potter movies. It almost feels as if he is using the fame from his childhood to now roam the acting world, constantly on the look-out for something silly or outlandish to star in—just because he can. But out of all the strange things he has done so far, his role in “Swiss Army Man” clearly takes the cake. How would you feel about playing a magical, farting corpse? 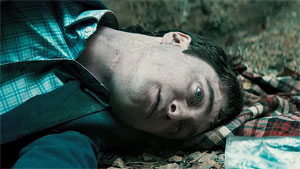 Oh yes, you read that right: a magical, farting corpse. You can’t even make this stuff up, which puts “Swiss Army Man” squarely in the category of über-strange movies. I have been following this movie for many months now, after first noticing the teasers and trailers while browsing the Internet. It is one of those films that you acknowledge, but somehow just can’t believe that it is real. Seriously? Someone put a budget down to turn this outlandish idea into a full-length feature film and not just some crazy thirty-minute short like “Kung Fury?” Perhaps there is hope for Hollywood, after all. Either way, it just boggles the mind that such an off-the-wall idea was even conceived, let away produced. It does make you wonder whether the writers of this movie were on crack or something while knocking out the script, but before you jump to any foregone conclusions, I am sure glad, they did whatever it is they did to get into that zone. 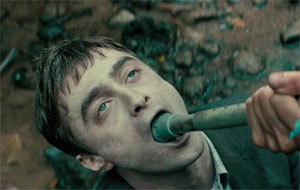 “Swiss Army Man” starts out with a minor prologue as floating messages in bottles and debris tell the tale of a young man named Hank (Paul Dano) who ran away from home and took a boat out to sea, only to be accidentally swept away to a deserted isle by a sudden storm. Straight forward set up, one would think, but hold on… Moments later, the film cuts to the island, revealing Hank as he is about to hang himself to escape his loneliness–well that escalated quickly. And not five minutes into the film, we are blessed with the main star of the show, a dead Daniel Radcliffe washes ashore on the beach. As Hank frees himself of his noose–with a minor complication, I may add–to examine the body, the audience is witnessing a symphony of farts. Charming.

Realizing the floater is dead, Hank returns to his fumbled attempt at suicide, but as he prepares, for a second time, to leave this earth, he observes the body continuing to pass gas in the tide. It gives him one of the weirdest ideas in the history of mankind. He decides to mount the Radcliffe-corpse like a jet-ski, and rides him across the ocean, propelled by nothing but the corpse’s flatulence. If that doesn’t give you an indication that you’re in for a truly awkward trip, nothing else will. 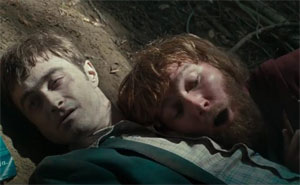 Before long, Hank makes it to the mainland. Unwilling to just leave the corpse to the tides, Hanks drags the body along with him. As they junker down in a cave, he names the corpse Manny, inspired by a weird wheezing sound that is emanating from the body. When, moments later, the corpse begins to speak, the film turns into an almost philosophical assortment of lectures about life, death, sex, and poop.

As you sit back and watch the movie and Hank’s attempts to find his way back to civilization, you will also notice that Hank is apparently the MacGyver of prop making. Most interestingly, however, all of his incredible props and set pieces do absolutely nothing to help him survive or get rescued, of course, serving more to elucidate the corpse Manny about the facts of life. 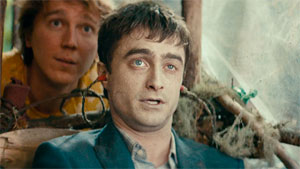 “Swiss Army Knife” is an incredible collage of weird and bizarre ideas, and Manny’s talents, in particular, are fascinating, as they range from the ability to vomit out freshwater, or shooting projectiles from his mouth like a machine-gun, to using his “wang” as a compass. I have no words for much of this. I am honestly dumbfounded, but you have to experience it, especially as the movie becomes almost abstract towards the end and leaves its conclusion up for interpretation. If you take a step back, you can really just describe this movie as either, “The Other Castaway” or “A Touching Tale of Necrophilia”.

The movie truly does not shy away from any awkward topics and conversations, some of which I feel uncomfortable to even bring up in this review. Actually, is there a rating system here on DVD Review? Are there restrictions to what one could write, I wonder? But betting back on-topic, overall, the movie was surprisingly well crafted. It wasn’t bad, nor was it particularly amazing. It’s memorable, that’s for sure, but there’s nothing all that special about it in a cinematic sense. It is a top notch production and the film never appears cheap or small, looking every bit as grand as any Hollywood drama would. 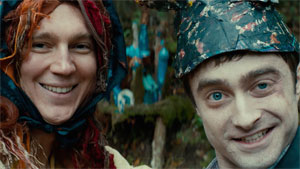 You can’t help but admire and congratulate the guys behind this film. They’ve somehow managed to make an enjoyable film out of a string of absolutely crazy ideas. As for Daniel Radcliffe? He does a pretty good job flopping around limply or keeping his poses static while inflecting a sense of humanity in the corpse he’s playing. It’s pretty hilarious altogether, especially when you consider that half of what he does includes him landing face-first into something.

Aside from the solid production, the quality practical effects, and the acting, I have to admit, the other thing that truly stood out for me was the soundtrack. It is a very different kind of original soundtrack, derived from mostly vocalizations and light singing from the lead roles in a sort of dreamy–almost blurred if it could be described that way–trance. I’d even consider the music as Oscar-worthy for its uniqueness and charming tranquillity, but that may really just be me. For a taste of it, seek out the “Montage” single which was probably the only energetic song in the entire soundtrack. 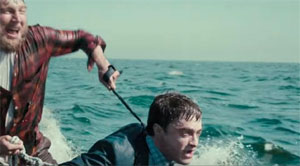 Underneath all the zany ideas, “Swiss Army Man” carries with it a very positive message in it as well. Wow, I can’t believe I am talking about analysis, considering how I tend to despise that sort of thing. But it has an almost “coming-of-age” sort of tone in a weird way. Think of it along the lines of the realization that you should just be you, even if the rest of the world will look at you as “weird.” It is an empowering statement, giving strength to the notion that we’re all weird in some way and that it simply manifests differently in different people. Now I am not saying you all should come charging out with all sorts of personal… things, but it’s rather nice to see that it promotes uniqueness instead of conformity in our society.

If you’re in the mood for something completely off-the-wall, or if you just want to see what Harry Potter is up to these days, give “Swiss Army Man” a try. Fair warning, though, expect a lot of spirituality and an innumerable amount of awkward conversations, as well as an ungodly amount of passing gas. Believe me, a fart will gain a whole new meaning after you’ve seen the “river rocket” sequence.