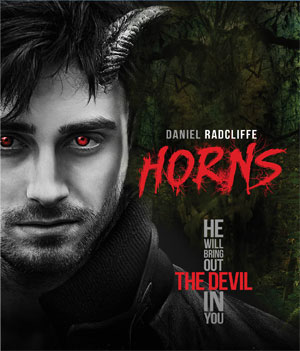 Anchor Bay Entertainment has just added Horns to its roster, scheduling the supernatural thriller based on the novel by Joe Hill for release on Blu-Ray Disc and DVD in January.

A supernatural thriller driven by fantasy, mystery, and romance, “Horns” follows Ig Perrish (Daniel Radcliffe), the number one suspect for the murder of his girlfriend, Merrin (Juno Temple). Hungover from a night of hard drinking, Ig awakens one morning to find horns growing from his head and soon realizes their power drives people to confess their sins and give in to their most selfish and unspeakable impulses–an effective tool in his quest to discover what happened to his girlfriend and exact revenge on her killer.

The release will also include the Behind-the-scenes Featurette ”The Making of Horns” as a supplement.