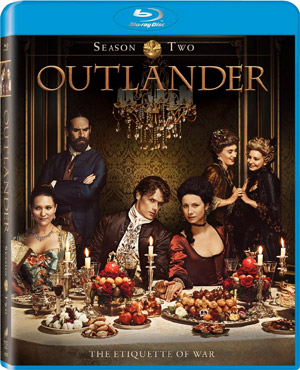 Claire (Caitriona Balfe) and Jamie (Sam Heughan) arrive in France, hell?bent on infiltrating the Jacobite rebellion led by Prince Charles Stuart (Andrew Gower) and stopping the battle of Culloden. With the help of Jamie’s cousin Jared (Robert Cavanah), they are thrown into the lavish world of French society, where intrigue and parties are abundant but political gain proves far less fruitful. Altering the course of history presents challenges that begin to weigh on the very fabric of their relationship – but, armed with the knowledge of what lies ahead, Claire and Jamie must race to prevent a doomed Highland uprising and the extinction of Scottish life as they know it.

The DVD version of the release will contain all thirsteen episodes that make up the second season, along with All-New Deleted and Extended Scenes with an introductions by Ronald D. Moore. Also included is a Gag Reel and the Featurettes “From Book to Screen: Discovering the Differences” and “Characters of Season Two”.

The Blu-Ray version will contain all of the above bonus features, but will further expand on the supplements by further offering up an Extended Version of the episode “Faith” and an Alternate Scene called “Dragonfly in Amber”.

The Blu-Ray version will also include addition Featurettes, namely “Jamie and Claire: To Hell and Back,” “Designing History: The Costumes of Outlander” and “Recreating 18th Century Paris”. A selection of Outlander Podcasts will round out the release.