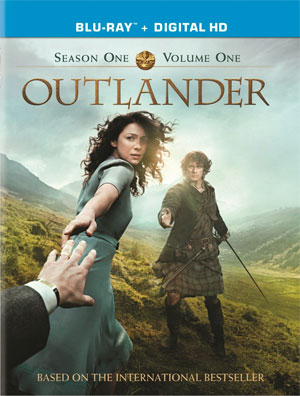 Sony Pictures Home Entertainment has just added the time-traveling television series Outlander to its line-up, scheduling a Blu-Ray and DVD version of the partial first season for release in March.

“Outlander” is starring Caitriona Balfe as WWII nurse Claire Randall, who, while on a second honeymoon with her husband, finds herself inexplicably transported back in time to Scotland, circa 1743. Forced to marry Jamie Fraser, a chivalrous Scottish warrior played by Sam Heughan, Claire begins an extremely challenging life that places her in two completely different worlds and with two different loves. Praised by critics and fans for the high production value and authentic period detail, Gabaldon’s portrayal of her amazingly strong female protagonist truly comes to life in this visually breathtaking series from Sony Pictures Television.

“Outlander: Season 1, Volume 1” contains all eight episodes in two-disc sets. The DVD version will also include “Outlander: An Epic Adaptation,” a featurette in which Diana Gabaldon shares the story of writing her first book and her thoughts about executive producer Ronald D. Moore bringing her stories to life.

A second featurette is also included, called “Authentic in Design: The Dresses and Kilts of Outlander,” in which producers and costume designers take viewers through the extraordinary wardrobe and share the distinct process of creating 18th-century fashion for the series.

The Blu-Ray version offers up a total of 21 Deleted Scenes as well as four additional, all-new Featurettes.

Fans can take an inside look at the casting for the show in “Casting Outlander,” and see how the actors immersed themselves in horseback training, Gaelic classes and much more for their roles in “Emerging a Scot: Cast Goes to Boot Camp.”  Viewers can also learn about the significance of the home to the Clan MacKenzie in “On Location:  Castle Leoch and the Magic of Scotland,” and take an in-depth walk through of both the set and stages with executive producer Ronald D. Moore.

Avid viewers can also follow Claire’s epic journey through time with the Limited Collector’s Edition, featuring a 32-page Booklet filled with photographs, excerpts from the scripts, and an Introduction from author Diana Gabaldon. This version also includes a placeholder for Volume 2, allowing fans to complete their Season 1 collection later on.