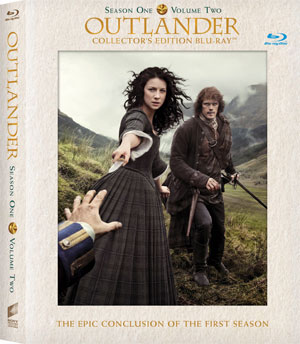 Sony Pictures Home Entertainment has just added Outlander: Season 1 Volume 2 to its line-up, bringing the second part of the adventure series to DVD and Blu-Ray Disc in late September.

The second half of the popular sci-fi adventure further explores the epic relationships of Claire Randall (Caitriona Balfe), a World War II nurse who inexplicably travels back in time to 18th Century Scotland, where she meets Jamie Fraser (Sam Heughan), a chivalrous Scottish warrior.

Claire Randall, a married WWII combat nurse who mistakenly falls back in time to 1743. As the season continues, Claire and Jamie’s relationship is tested and Claire must reconcile her modern mindset with this 18th Century world. Ruthless Redcoats, volatile clan politics and a brutal witch trial force Jamie and Claire to escape to a new home. Just when their life as a married couple begins to take shape, Jamie is once again drawn into Captain Randall’s darkness. Ultimately, Claire discovers there is a fate worse than death as she struggles to save Jamie’s heart, as well as his soul.

The DVD version will come with a Gag Reel as well as Outlander Podcasts on every episode, along with the Featurette ”Weaving Authentic”, discussing the making of the Fabrics of Outlander.

Further you will find Three All-New Featurettes on the release. ”Diana Gabaldon Tours Outlander” allows author Diana Gabaldon to witness her words coming to life as she tours the sets of Outlander for the first time. In ”Outlander Cast & Crew Table Read” you can join the cast and crew as they come together for table reads on episodes “The Way Out” & “The Gathering”, and in ”A Triangle in Time”Sam Heughan, Caitriona Balfe and Tobias Menzies discuss the passionate yet complicated love triangle between Jamie, Claire and Frank.

The release will also arrive as a Limited Blu-Ray Collector’s Edition in an exclusive collectible packaging with 3D Art, a 32-page Book with Photographs, Excerpts from the Script and an Introduction from Ronald D. Moore.