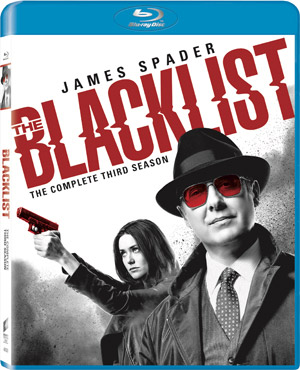 Sony Pictures Home Entertainment has just announced the upcoming release of The Blacklist: The Complete Third Season, scheduling a Blu-Ray and DVD version for August.

In the third season of the hit drama “The Blacklist, ” FBI Agent Elizabeth “Liz” Keen (Megan Boone> is now a fugitive and on the run with criminal mastermind Raymond “Red” Reddington (James Spader). With Assistant FBI Director Harold Cooper under investigation, a conflicted Agent Donald Ressler leads the FBI Task Force on a massive manhunt for Liz and Red. As they struggle to stay one step ahead of their former colleagues, Liz immerses herself into Red’s underworld of disreputable contacts and covert operations. Liz is on an unpredictable journey of self-discovery and all the pieces of her life, including her indefinable relationship with Tom, will be drastically challenged as she continues to believe Red holds all the answers.

The DVD version will also contain Outside the Box, a look at the making of The Blacklist Comic Book, plus All About Aram and Red’s Gems: Favorite Lines From Season 3.

The Blu-Ray version will include all of these buns features, of course, along with Deleted and Extended Scenes and Episode Commentaries, as well as From the Shadows, giving you a look at the villains of season 3 and Creating The Stunts.

“The Blacklist: The Complete Third Seasons” will be in stores on August 2 with a massive $75.99 price tag for the Blu-Ray version and a $65.99 sticker price on DVD.