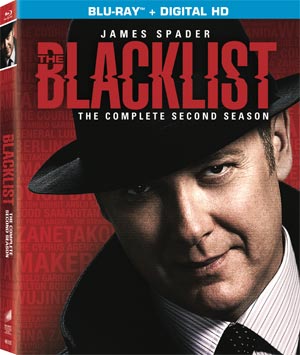 Sony Pictures Home Entertainment has added The Blacklist: The complete Second Season to its line-up, bringing the TV show to Blu-Ray Disc and DVD in August.

For decades, ex-government agent Raymond “Red” Reddington (James Spader) has been one of the FBI’s Most Wanted fugitives. Last season, he mysteriously surrendered to the FBI but now the FBI works for him as he identifies a “blacklist” of politicians, mobsters, spies and international terrorists. He will help catch them all…with the caveat that Elizabeth “Liz” Keen (Megan Boone) continues to work with him. Red will teach Liz to think like a criminal and “see the bigger picture” …whether she wants to or not.

“The Blacklist” will arrive on three discs, and the DVD version will also contain the Featurettes ”Raymond Reddington: Man of the World” and ”Building a Blacklister: Vanessa Cruz”.

The Blu-Ray version will contain the same Featurettes, but will further bolster the release with Commentary Track by Jon Bokenkamp and John Eisendrath on the episodes “Leonard Caul” and “Tom Connolly.” Also included are Deleted Scenes and the additional Featurettes ”After the Game: Luther Braxton” and ”Known Associates: Red’s Inner Circle”.