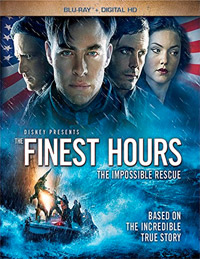 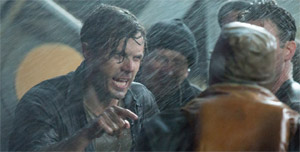 Some movies work, not because of their intricate plot twists or their epic scope, but because the story at their heart is one that connects with viewers on a much more fundamental, emotional level. This, I think, is true for “The Finest Hours,” a movie based on true events that makes us relive a sea rescue operation that is bordering on the miraculous.

I had not even heard of “The Finest Hours” when it came to theaters and blissfully overlooked it during its theatrical run. It was only when the Blu-Ray version was announced and I read the synopsis that I took notice of the film. When the review copy arrives, courtesy of Walt Disney Home Entertainment, I was eager to check it out and see what I’ve missed. 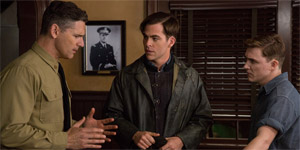 In Massachusetts, 1952, as brutal storm is hammering the seas around Cape Cod and the T-2 class oil tanker Pendleton meets a grim fate—in the pounding of the high seas, the ship breaks in half. One half, with a crewmen on board immediately sinks to the bottom of the ocean, but the other half remains afloat. But without a bridge, without proper control and with the wreck filling with water, it is only a matter of time until the remains of the ship will sink as well.

Only ten miles from shore, the Pendleton is unable to issue a Mayday call so the crew uses the only thing at their disposal, ship’s horn to alert others to their position. While they carefully try to maneuver the fragile wreck onto a sandbank to run the ship aground and out of the deadly grip of the currents and waves, the crew employ every ounce of ingenuity they have, rigging a rudder and using the thrust of the engine to navigate. And as luck has it, someone on land actually hears their horn and see the drifting hulk in the fog-shrouded seas. 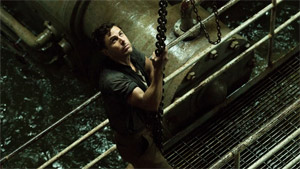 When the Coast Guard hears of the Pendleton, the understaffed skeleton crew that remains at Chatham Station feels helpless. Going out in these seas, getting over the sandbar that shelters the harbor, facing the furious cross-currents and rise and ebb of the sea that could ground or destroy any boat, the station’s Commander orders Bernie Webber (Chris Pine) to put together a crew and go rescue the crew of the Pendleton.

With three volunteers by his side, Andrew Fitzgerald (Kyle Gallner), Richard Livesey (Ben Foster) and Ervin Maske (John Magaro), they brave the seas, risking their lives to reach the Pendleton and offer help to the crew lost at sea. 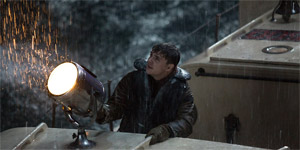 Pummeled by endless rain and the pounding waves, with needle-sharp accuracy, Webber somehow manages to avoid the pitfalls of the sandbar and navigates the coast guard vessel into the open ocean. Soaked, freezing, bruised and dazed, the coast guard officers now face the challenge to find the lost ship in the ocean, without a compass of their own, with only their instincts and the sound of the waves to guide them.

And once again, as if by miracle, Webber manages to find the black looming hulk of the Pendleton, adrift in 50-foot waves. But following their excitement comes the realization that their 36-foot boat will not be able to hold all crewmen. Registered to hold only 12 people, including the crew, Webber has to make a decision… how will he proceed, and how, in the world, will they ever manage to safely get these men off the towering tanker?

The events surrounding the rescue of the Pendleton have gone down in maritime history for good reason. It is an unequaled accomplishment that shows incredible bravery and an incredible amount of good fortune in the face of the most terrifying odds. 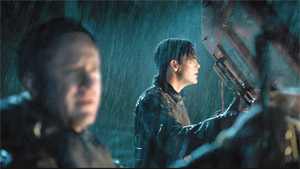 I’ve seen viewers complain that “The Finest Hours” is old-fashioned to a fault, something I do not agree with. Sure, it is not your flashy, bang-bang, ridiculously over-paced movie that is dramatic turns of events and plot twists that throw you for a loop, but that’s how the events played out—fairly linearly. To criticize the film for it is like invalidating history itself and claiming it isn’t exciting enough. It is a ridiculous expectation to have for a film that is based on real events. I suppose filmmakers can do no right. If they stay true to the materials, they are being criticized for being predictable, and if they stray from the original material, they are keel-hauled for, well, straying from the material.

I enjoyed the film tremendously and it was the story itself that had me enthralled, but even more so, the people who were depicted in the film, who actually went through this unbelievable rescue. I felt it was an honor to be allowed to witness and partake in the bravery of these characters and in the emotional toll it took on everyone involved. To me, that was more than satisfying enough to thoroughly enjoy and recommend this film. 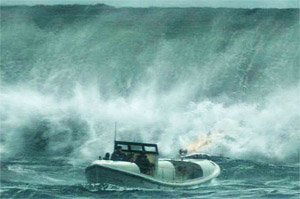 Walt Disney Home Entertainment is giving us a magnificent 1080p high definition transfer on this Blu-Ray disc that perfectly complements the movie. With deep blacks, the image has great depth and shadows never break up. Since much of this story plays at night or in barely illuminated environment, the proper reproduction of these shadow levels is extremely important and I am glad to report that the disc is flawless in that department. Colors are rich and balanced, and the image holds a solid amount of detail throughout.

The disc DTS 7.1 HD Master audio track that is powerful and robust. Whether it is the groan of the dying tanker, the pounding of the sea or the ambient noise, such as the eternal rainfall, surrounding the events, every detail is perfectly reproduced and placed in the surround field. Dialogues are perfectly integrated and always understandable.

As extras, the release contains a number of deleted scenes and five featurettes, focussing on various aspects of the movie. they offer a look at the production of the film, as well as the cast and crew members, offering insight into the difficulties of the making of this movie, and in bringing to life these real-life heroes. Other featurettes take a closer look at history and the real events, surrounding the rescue.

“The Finest Hours” is a celebration of heroism and shines a light on an event that most of us have never heard of before. This historic rescue is so incredibly unbelievable that even today, over sixty years later, it is still cited as one of the greatest moments in Coast Guard history.

Do yourself a favor and check out this movie. It is inspiring, breath-taking and superbly entertaining.