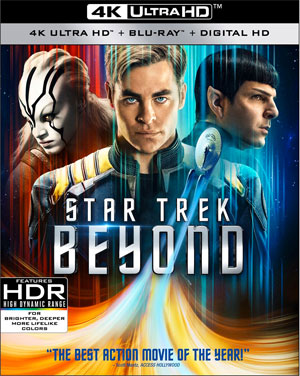 Paramount Home Entertainment sent along information about the upcoming release of Star Trek Beyond, scheduling a 4K UHD, Blu-Ray 3D, Blu-Ray and DVD version to make its appearances in early November.

The latest installment in the iconic franchise delivers unbridled action as the Enterprise crew explores the furthest reaches of uncharted space, where they encounter a mysterious new enemy who puts them and everything the Federation stands for to the test.

The 4K Ultra HD, Blu-ray 3D and Blu-ray Combo Packs are all loaded with over an hour of bonus content, such as Deleted Scenes and a Gag Reel.

You will also find a host of Featurettes on the release, such as ”Beyond the Darkness” where you get to meet visionary producer J.J. Abrams, director Justin Lin and co-writers Simon Pegg and Doug Jung as they discuss the inspiration for the movie’s storyline and how it came to life.

In ”Enterprise Takedown”, experience edge-of-your-seat action and see how a shocking attack destroys the USS Enterprise, while in ”Divided and Conquered” you can learn how filmmakers pushed the boundaries in “Star Trek Beyond” by forcing the Enterprise crew into their most challenging situations yet.

”A Warped Sense of Revenge” gets you to meet Star Trek’s newest villain, Krall, as actor Idris Elba reveals the backstory behind his character’s terrifying ambitions, and in Trekking in the Desert”, go on set to Dubai and discover how its futuristic architecture became the foundation for the most innovative Starbase yet.

”Exploring Strange New Worlds” is a tour of the incredible production sets with director Justin Lin, while ”New Life, New Civilizations” shows how the special effects designers met the challenge to create an unprecedented 50 new alien species for the film to celebrate Star Trek’s 50th Anniversary.

”To Live Long and Prosper” is a journey through the past 50 years of Star Trek with J.J. Abrams and the cast as they reflect on the evolution of this iconic sci-fi series.

Last, but not least, you will also find For Leonard and Anton” on the disc, a touching tribute to the legendary Leonard Nimoy and beloved crew member Anton Yelchin.

All high definition versions will feature Dolby Atmos audio track as well as Digital HD, and arrives as combos, containing various formats of the film.

The DVD version will not feature an bonus materials.

Amazon also has an exclusive Gift Set version of the release that also contains a model of the Enterprise for $44.99.