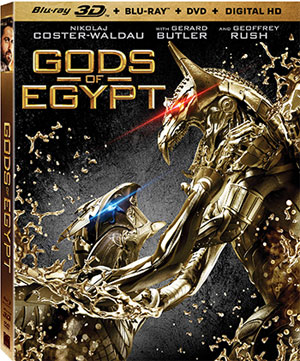 Lionsgate Home Entertainment has announced details about the upcoming release of Gods of Egypt, bringing the special effects spectacle to 4K Ultra HD, Blu-Ray Disc and DVD in May.

The ultimate battle between good and evil threatens to destroy all creation in this epic fantasy-adventure bursting with spectacular action and amazing special effects. Gerard Butler and Nikolaj Coster-Waldau star as rival gods Set and Horus, who are locked in a war to rule the universe. To defeat the merciless Set, Horus joins forces with a brave mortal for a journey that will take them across Egypt, through the heavens, and into the afterlife in an unforgettable quest to save mankind.

The 4K Ultra HD combo version will feature a 4K transfer of the film, accompanied by a DTS: X audio track. The combo will also include the Blu-Ray version of the film, along with its bonus features, such as Deleted Storyboards and the Featurettes “A Divine Vision: Creating a Cinematic Action Fantasy,” “Of Gods and Mortals: The Cast,” “Transformation: Costume, Make-up & Hair,” “On Location: Shooting in Australia,” “The Battle for Eternity: Stunts” and “A Window into Another World: Visual Effects”.

The DVD version will only feature the Featurettes “The Battle for Eternity: Stunts” and “A Window into Another World: Visual Effects” as supplements.