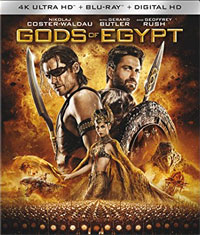 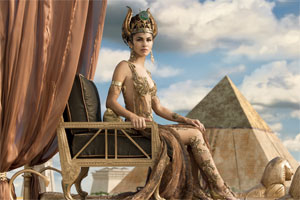 4K Ultra HD is eagerly trying to build a platform for itself, making sure the people can see and experience the difference dramatically increased resolution in pixels and color can make. Granted, it is a hard sell, one way or the other. As long as there are people who feel that DVD is still good enough, higher resolution and clarity alone is simply not a good selling point. You need products that truly push the envelope and serve as showcases for the improved format.

Clearly, Lionsgate Home Entertainment’s “Gods of Egypt” tries to be such a contender. It’s an almost forgone conclusion. A brand new movie, filled to the brim with computer generated special effects, set pieces and backgrounds, colorful and lush production design. What could possibly go wrong?

Horus (Nicolaj Coster-Waldau) is one of the many gods dominating ancient Egypt, set to take over the reign over all of Egypt from his father Osiris (Bryan Brown), when his uncle Set (Gerard Butler) interrupts the official ceremonies. Feeling betrayed, he is determined to steal the throne with force. He kills Osiris in front of all the assembled gods. He tears out Horus’ eyes and banishes him, and swears to kill anyone opposing him. He takes the throne and begins his ruthless and violent reign, sending the once peaceful and glorious empire into chaos and ruin. 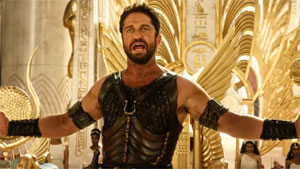 Meanwhile the young thief Bek (Brenton Thwaites) manages to steal a priceless artifact. One of the eyes of Horus that Set kept as symbols of power and protection. Bek is determined to return the eye to Horus so that the fallen god may rise again and defeat the opposition, but more importantly so that the god would resurrect Bek’s girlfriend.

But his humiliation has done little for Horus’ temper. Superior and self-centered, the god has little patience for the human’s desires and wishes… until he realizes that Bek represents he originally stood up for and that the young man could, in fact, be the key to destroying Set.

As you would expect, “Gods of Egypt” is a popcorn romp that is as fast-paced as it is shallow. Characterizations are minimal and the plot is no more than a series of linear events taking the quest from one point to the next without much surprises or plot turns. The appeal, of course, is the opulent visual presentation, the large-scale, epic setting and the bombastic action. Nothing wrong with that, as long as you know what you’re getting into. 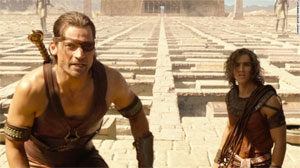 On the whole, the story is decent enough and keeps the viewer engaged, always interested what tremendous set piece is waiting just around the corner. With fantastic creatures that are borrowed from mythology, and encounters that are well within the realms of the supernatural, the film does have some cool moments that will keep your eyes glued to the screen.

For a movie that is probably 90% computer generated, the acting is surprisingly natural. You can tell that the new crop of actors is getting used to this way of filmmaking and are comfortable with acting in somewhat of a void that is being filled in at a later point. Despite its acting shortcomings, it actually speaks for their qualities, as they are able to fully engage their own imagination to bring these characters to life successfully. 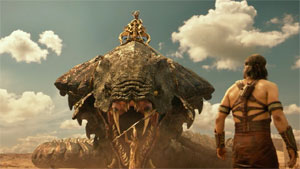 As 4K Ultra HD release that is so heavy on computer-generated imagery, it has been clear from the get-go, that this would be a spectacular presentation, and it certainly did not disappoint. While one might argue with the artistic choices and the quality of the CGI itself, there can be absolutely no doubt, that the representation of the movie on this ultra high definition release is spectacular. The delineation of even the smallest changes in color, the razor-sharp definition of edges and the staggering black levels, make this release a worthy showcase product in terms of the visual qualities of Ultra HD. Since the movie never went to film and is an all-digital transfer, there is not even the slightest hint of image degradation evident that will inevitably come once we see older movies make their appearance in this superior format.

The release features a DTS-X audio track that is every bit as impressive. Given the bombastic nature of the film and the amount of action packed on the screen, it is hardly surprising, that this audio track is also an excellent example of modern audio design and its reproduction in the home. Without the limitation of discrete channels, the audio can emerge practically anywhere in the 3-dimensional sound field, making the experience tremendously engaging. But even in the traditional 5.1 and 7.1 down-mixes, the audio on this release delivers in spates, rumbling your foundation while keeping the higher ends of the spectrum clean and undistorted.

The release also contain the regular Blu-Ray version of the movie on a second disc, as well as a number of bonus features on that Blu-Ray disc. Among these supplements you will find some storyboard for deleted scenes, as well as a series of promo featurettes covering the characters, the making of the film, the locations, the cast members as well as the costumes, make-up and hair.

“Gods of Egypt” is what it is. A mindless popcorn movie, designed to be a summer blockbuster. It is not demanding but fortunately it is not stultifying either, so it does make for some entertaining viewing. It is clearly understandable, however, why the movie was such a bust at the box office, because it doesn’t offer anything really new and oftentimes plays strictly to the senses, so much so that it can become a bit numbing, and in the process loses the heart of the storytelling. The 4K Ultra HD version is clearly playing its muscles in the technical department, but will it be enough to convince people to buy into ultra high definition just yet? You be the judge.