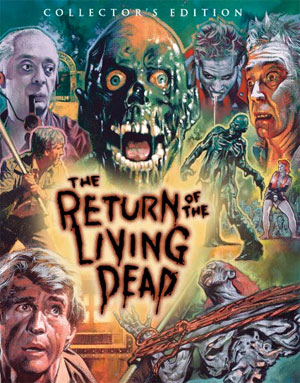 Shout! Factory has just revealed details about the upcoming Blu-Ray Collector’s Edition of Dan O’Bannon’s The Return of the Living Dead, scheduling the undead feast for release in July.

Just when you thought it was safe to go back to the cemetery, those brain-eating zombies are back and hungry for more tasty mortals. A fiendish mix of outrageous humor and heart-stopping terror, “The Return of the Living Dead” is a veritable smorgasbord of fun (LA Herald-Examiner) filled with skin-crawling jolts, eye-popping visuals and relentless surprise! On his first day on the job at an army surplus store, poor Freddy unwittingly releases nerve gas from a secret U.S. military canister, unleashing an unbelievable terror. The gas re-animates an army of corpses, who arise from their graves with a ravenous hunger for human brains! And luckily for those carnivorous cadavers, there is a group of partying teens nearby, just waiting to be eaten!

This definitive set includes a collectible slipcover featuring newly rendered artwork and a reversible cover wrap featuring original theatrical key art. Naturally, the release is filled to the brim with bonus features, including a new Commentary Track with Gary Smart (co-author of “The Complete History of the Return of the Living Dead”) and Chris Griffiths.

Further, you will find the Featurette ”The Decade of Darkness” on the release, as well as Theatrical Trailers, TV Spots and two Still Galleries.
Zombie Subtitles for the Film and In Their Own Words – The Zombies Speak will also be part of the release.

Another new feature is Horror’s Hallowed Grounds, revisiting the locations of the film.

A Conversation with Dan O’Bannon, is also included, as well as The Origins of the Living Dead, an interview with John A. Russo, The Return of the Living Dead – The Dead Have Risen, interviews with cast members Clu Gulager, James Karen, Don Calfa, Brian Peck, Thom Mathews, Beverly Randolph, Linnea Quigley and more…,and Designing the Dead, offering up interviews with writer/director Dan O’Bannon and production designer William Stout.

“The Return of the Living Dead” will arrive in its full glory on July 19. If you order the release directly through Shout! Factory’s website, you will even get a poster of the cover with the disc, and you will receive the disc two weeks ahead of its regular street date!