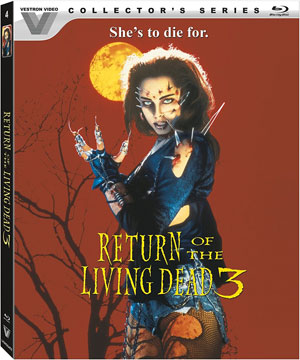 Lionsgate Home Entertainment has just announced the upcoming release of Return of the Living Dead 3, preparing a brand new Blu-Ray Limited Edition of Brian Yuzna’s movie for release in November as part of the Vestron Video Collector’s Series.

In “Return of the Living Dead: Part II, ” the chemical Trioxin turned people into flesh-eating zombies. Now, the government is trying to control these unstoppable cannibalistic killers in “Return of the Living Dead 3.” When a young man uses the chemical to bring his girlfriend back to life after a motorcycle accident, she is driven to eat the only thing that will nourish her…human brains! She tries to stop her own feeding frenzy but a chain reaction has already begun, as hordes of undead are unleashed from their graves!

Aside from a 1080p high definition transfer of the movie with its original stereo audio track, the release will also offer up a Commentary Track with Director Brian Yuzna, as well as a second Commentary Track featuring Actress Melinda Clarke and Special Make-Up Effects Artist Tom Rainone.

The release will be rounded out by a Still Gallery.

The “Return of the Living Dead 3” limited edition Blu-Ray version will arrive in stores on November 22 for $34.97.