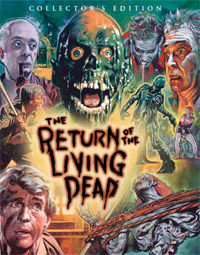 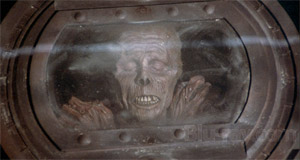 After completing “Night of the Living Dead” together in 1968, director/writer George A. Romero and co-writer John Russo parted ways. Since they both felt they had contributed to the success of the iconic cult classic, they mutually agreed that both writers could use the term “Living Dead” as a moniker for their future projects.

Romero successfully continued his career with the “Dead” movies, following up the 1968 film with “Dawn of the Dead,” which became not only a genre landmark but essentially started the zombie craze of the 70s, and whose influences are still evidence every day on TV and cinema screens with production ranging from “The Walking Dead” to all the zombie fare that graces the silver screen.

Russo also continued to create zombie-themed films over the years but his most celebrated on is his 1985 collaboration with “Alien”-writer Dan O’Bannon, “The Return of the Living Dead.” The original intent had been to create an authentic sequel to “Night of the Living Dead,” but O’Bannon felt strongly—and correctly—that George Romero had firmly staked out that segment of the market and instead, the team opted to create a dark horror comedy instead. 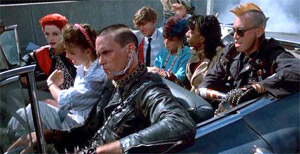 Shout! Factory has now taken the effort to give “The Return of the Living Dead” a Collector’s Edition treatment, and as you would expect, it has all the bells and whistles that fans desire.

The film begins quite innocently in a medical supplies warehouse. It is Freddie’s (Thom Mathews) first day on the job and his colleague Frank (James Karen) is introducing him to the skeletons, corpses and other parts for medical studies that are stored and shipped from the facility. Since Freddy is quite evidently curious, but also a little freaked out, Frank decides to amp up the atmosphere. He tells Eddie the unsettling story of a Military experiment gone awry and zombies that were created by accident many years ago. He goes on to tell Eddie that he actually found those corpses the Military tried to hide and rid themselves of and that he stored them in the warehouse basement. 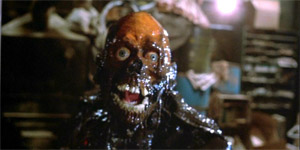 Frightened out of his wits, Freddie doesn’t believe a word of the cockamamie story of dead people coming back to life, so Frank takes Freddie down to the basement for a look. There, stored in special barrels carrying military designations, are indeed corpses, and as they mess with the barrels, one of the canisters is damaged. A noxious gas escapes. The same gas that created the animated corpses in the first place, and soon everything in the warehouse that was once dead begins to move again. Trying to cover up for their mistake, Frank and Freddie try to rid themselves of the evidence but in their panic, they only make matters worse, and soon they raise an entire cemetery of zombies, all with only one thing on their mind… to eat live brains!

From the acting to the dialogues, “The Return Of The Living Dead” is one Hell of a romp that will have you giggle from the first to the last minute. At the same time, it delivers shocks and graphic violence like some of the most hardcore splatter films at the time. The viewer is constantly jerked between laughter and observing zombies eating brains out of a shattered skull, and the experience is, to be sure, quite unique. So unique, in fact, that soon after its release in 1986, “The Return Of The Living Dead” became a classic in its own right, spawning a solid string of sequels. 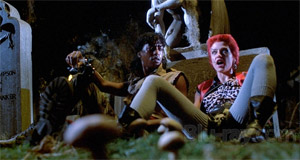 One other notable thing about the film—apart from its radical, almost anarchic, approach to the subject matter—is its production and cinematography. The film evokes memories and a feel that is highly reminiscent of the EC Comics like “Tales From The Crypt.” When the ghoulish creatures rise from their graves in that ominous rainy night, you can almost see the comic book imagery it relates to in your mind. The way the actors carry themselves, the way they deliver their often-minimalist dimwitted dialogues, it all resembles an animated horror comic strip so much that it becomes a pleasure to watch, even upon the umpteenth viewing.

“The Return Of The Living Dead” has been released numerous times over the years on DVD and even as a Blu-Ray Disc a number of years ago. Nonetheless, I wager that you’ve never seen the film like this. Shout! Factory has created a brand new transfer of the movie from the film’s interpositive and then color-corrected the transfer and cleaned it up it for this Blu-Ray release. The love and effort that went into it shows in every frame. By far, this is the best the film has ever looked. Not only id the presentation free of blemishes and defects, but it offers a bold color palette that makes every previous version look like a muddy mess. It perfectly restores the punky feel of the film with its clash of bright colors and deep blacks—all of which are perfectly reproduced. Whether it’s Linnea Quigley’s fiery hair or the crimson of the blood flowing from smashed skulls, the presentation is incredibly rich with hues that never feel oversaturated. 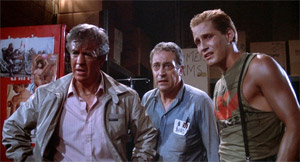 The level of grain is minimal, despite the film’s age, and despite its often difficult lighting conditions, the transfer holds an incredible amount of shadow detail, bringing out every little nook and cranny in the image. Definition of the transfer is universally remarkable and truly restores the film in its full glory, down to the smallest image detail, including the memos on the pinboard in the background of certain shots.

Shout! Factory also restored the audio track, going back to its original source elements. The track is balanced and has good bass response, allowing for a solid presentation with dialogues that are always understandable. The punk rock soundtrack that accompanies the movie is a large part of the film’s appeal and it is great to see it come to life with full-blown dynamics on this release.

When it comes to the bonus materials on this release, Shout! Factory went all in. Not only did the studio include virtually every bonus feature that has ever been created and released as part of previous versions, but they have created and added a full host of brand new supplements to top it off.

With that in mind, you can now look forward to four commentary tracks to accompany the film. There is, of course, the one with writer/director Dan O’Bannon and production designer William Stout. It is a very good commentary that sheds light on many aspects of the production. But it also has a light and entertaining note as the two recall many great moments on the set, share anecdotes about the cast and crew and some of the adversities they faced. The commentary track is well-rounded and certainly a valuable asset for all fans of the movie.

In addition to these, you will now also find a new commentary with Gary Smart (Co-author Of The Complete History Of The Return Of The Living Dead) and Chris Griffiths on the release, as well as a new commentary with actors Thom Mathews and John Philbin, along with Make-up Effects Artist Tony Gardner. 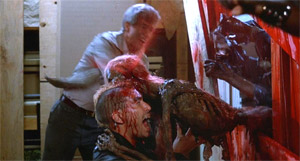 To round out the new bonus features, you get a “Horror’s Hallowed Grounds” installment that revisits the locations of the movie to show you what they look like today.

As I mentioned above, all the materials from previous releases are included also, so you will find hours and hours worth of clips, footage, featurettes and interviews on the disc set that will satisfy even the most demanding fan.

“The Return Of The Living Dead” is a cult classic, and deservedly so. It is with quite some awe that I have tackled this review and this new 2-disc set by Shout! Factory, because the amount of painstaking effort and love that has been put into this release is nothing short of amazing. No matter which version of the film you own, toss it aside and make sure to get this new Collector’s Edition that Shout! Factory has prepared for you, because you have never seen the film until you’ve seen it on this disc!