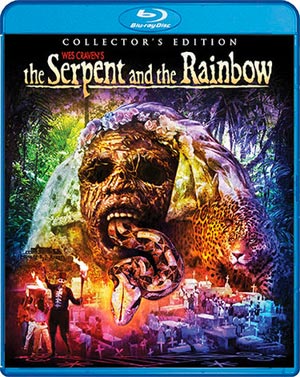 A Harvard anthropologist (Bill Pullman) is sent to Haiti to retrieve a strange powder that is said to have the power to bring human beings back from the dead. In his quest to find the miracle drug, the cynical scientist enters the rarely seen netherworld of walking zombies, blood rites and ancient curses.

Based on the true-to-life experiences of Wade Davis, starring Cathy Tyson, Zakes Mokae, Paul Winfield and Michael Gough, and filmed on location in Haiti, it’s a frightening excursion into black magic and the supernatural!

The studio has not yet announced the bonus materials that will accompany the film, but given Shout! Factory’s track record, you can rest assured that it will be packed with existing supplements, as well as a number of new treats for fans of the film.

Adorned by brand new cover artwork, “The Serpent And The Rainbow“ will arrive on January 26 and can be yours for $34.93. If you order the title directly through Shout! Factory’s website you will actually receive the disc two weeks before its actual street date, as well as an 18”x24” poster of the new cover artwork.