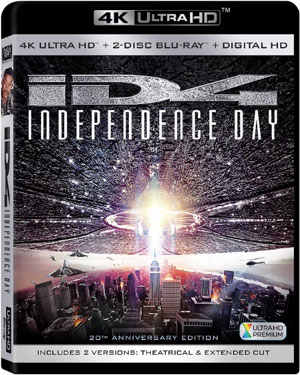 Twentieth Century Fox Home Entertainment is celebrating the 20th Anniversary of Roland Emmerich’s scifi spectacle Independence Day hand in hand with the theatrical release of the film’s sequel in June. The highlight the celebration, Fox is bringing the film not only to DVD and Blu-Ray for the celebration, but also dishes out a 4K Ultra HD version of the movie in June.

“Independence Day” delivers the ultimate encounter when mysterious and powerful aliens launch an all-out invasion against the human race. The spectacle begins when massive spaceships appear in Earth’s skies. But wonder turns to terror as the ships blast destructive beams of fire down on cities all over the planet. Now the world’s only hope lies with a determined band of survivors, uniting for one last strike against the invaders – before it’s the end of mankind.

The release will feature Newly Restored Special Edition and Original Theatrical Cuts of the movie, as well as a Commentary Track with Director Roland Emmerich and Producer Dean Devlin, and a second Commentary Track with VFX Supervisors Volker Engel and Doug Smith, both of which have been part of previous releases.

However, the release will also come with a new 30-minute Documentary called ”Independence Day: A Legacy Surging Forward” and a Datastream Trivia Track.