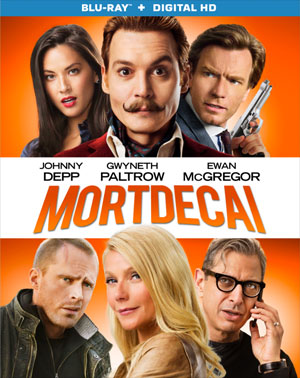 Lionsgate Home Entertainment has just added the witty caper comedy Mortdecai to its release line-up, scheduling the star-studded mix between Austin Powers and Inspector Clouseau to hit Blu-Ray Disc and DVD in early May.

After a priceless painting is stolen, shady art dealer Charlie Mortdecai (Johnny Depp) is recruited by an old rival (Ewan McGregor) to get it back. Mortdecai questions his rival’s intentions, but takes the job for the money and to keep his high-maintenance wife (Gwyneth Paltrow) happy. With the help of his manservant (Paul Bettany), Mortdecai must face terrorists, angry Russians and more in a hilarious globe-trotting chase.

Based on the novel by Kyril Bonfiglioli, the adventure through the world of black market art dealers will be presented in 1080p high definition with a DTS 7.1 HD Master Audio track on Blu-Ray.

As bonus features the release will include the Featurettes ”Stolen Moments: On the Set of Mortdecai” and ”The Art of Noise: Making Music for Mortdecai.”.