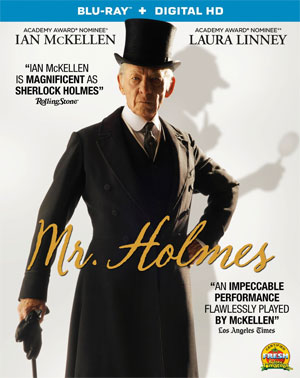 Lionsgate Home Entertainment and Miramax have revealed details about the upcoming release of Mr. Holmes, bringing the film to Blu-Ray Disc and DVD in November.

See the world’s most famous detective as you’ve never seen him before, portrayed by acting legend Ian McKellen, in this ingeniously plotted suspense-thriller. For thirty years, Sherlock Holmes has been haunted by his final case, one that remains unsolved. Now, spurred by a mysterious trip to Japan, Holmes quietly slips out of retirement to confront the ghosts of his past—and a spellbinding mystery that will take all of his deductive powers to solve.

Aside from the feature film, the release will also contain the Featurettes ”Icon” and ”Story”, taking you behind the scenes of the production.