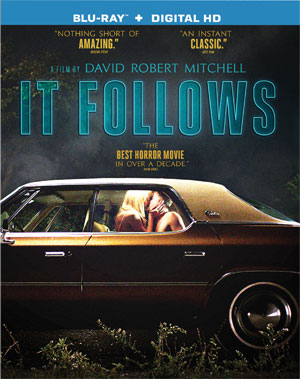 Anchor Bay Entertainment, RADiUS and Dimension are bringing a new horror film to your home, when they will release It Follows to Blu-Ray Disc and DVD in July.

For 19-year-old Jay, fall should be about school, boys and weekends out at the lake. But after a seemingly innocent sexual encounter, she finds herself plagued by strange visions and the inescapable sense that someone, or something, is following her. Jay and her teenage friends must now find a way to escape the horrors that seem to be only a few steps behind.

One of the highest grossing independent films of the year so far, “It Follows” is credited with ushering in a new era of indie film success, appealing to horror genre fans, art house cinema aficionados and the general movie-going audience. With spectacular cinematography and a powerful score, the film is destined to become a cult classic.

Also included on the disc is the Featurette “A Conversation with Film Composer Disasterpeace” and a Poster Art Gallery.