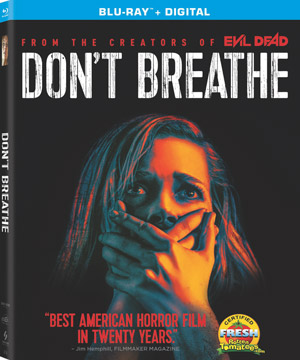 Starring Jane Levy (Evil Dead), Dylan Minnette (Goosebumps), Daniel Zovatto (It Follows) and Stephen Lang (Avatar), the film follows a group of thieves who break into a blind man’s home thinking they’ll get away with the perfect crime. When the blind man reveals a dark side, the trio quickly discovers they were dead wrong.

Aside from the feature presentation, the release will also offer up a Commentary Track with Director Fede Alvarez, Co-Writer Rodo Sayagues and Actor Stephen Lang, as well as a selection of Deleted Scenes with optional commentary.

The release will also include the five Featurettes “No Escape,” “Creating the Creepy House,” “Meet the Cast,” “Man in the Dark” and “The Sounds of Horror”.