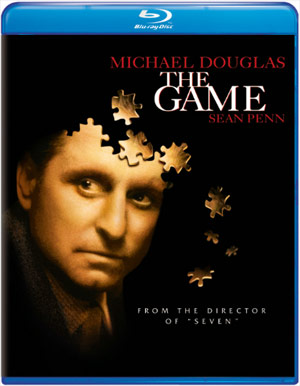 Universal Home Entertainment has added David Fincher’s 1997 thriller The Game to its roster also, scheduling a Blu-Ray Disc version of the film for release in July.

There are no rules in The Game… which will make life very difficult for Nicholas Van Orton (Michael Douglas), a successful San Francisco businessman who is always in control.  Van Orton lives a well-ordered, wealthy lifestyle until an unexpected birthday gift from his wayward brother Conrad (Sean Penn) threatens to destroy it all.  Against his will, Nicholas has been enrolled in a game – a strange and “profound life experience” that begins quietly, but soon erupts into a domino effect of devastating events.  Van Orton has to win this deadly, live-action game before it consumes his entire life.

The taught and fascinating thriller will be presented in a 1080p high definition transfer on the release, accompanied by a DTS 5.1 HD Master Audio track. Unfortunately, Universal Home Entertainment has decided not to add any bonus features other than the film’s Theatrical Trailer to the release, which is unfortunate.