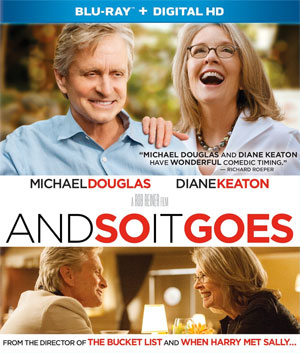 Twentieth Century Fox Home Entertainment has just added And So It Goes to its release roster, scheduling a Blu-Ray and a DVD version for release in November.

Oscar Winners Michael Douglas and Diane Keaton give captivating performances in acclaimed director Rob Reiner’s smart, sexy comedy about life, love and second chances. When his estranged son leaves his daughter for him to raise, obnoxious realtor Oren Little (Douglas) recruits his sweet neighbor Leah (Keaton) to help out. In the process, he realizes it may not be too late to begin appreciating the people in his life – and even allowing a few new ones into it!

This will be a bare-bones release that will contain only the movie’s Theatrical Trailer as a bonus feature.