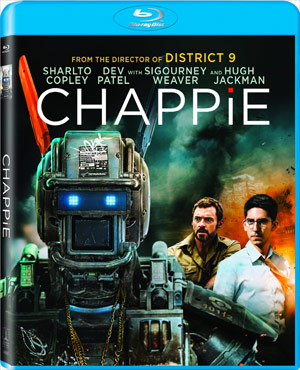 Sony Pictures Home Entertainment has added Chappie to its upcoming line-up, scheduling a Blu-Ray Disc and DVD version of the sci-fi action thriller for release in June.

In the near future, crime is patrolled by an oppressive mechanized police force.  But now, the people are fighting back.  When one police droid, Chappie, is stolen and given new programming, he becomes the first robot with the ability to think and feel for himself.  As powerful, destructive forces start to see Chappie as a danger to mankind and order, they will stop at nothing to maintain the status quo and ensure that Chappie is the last of his kind.

From the director of “District 9” and starring Sharlto Copley, Dev Patel, Sigourney Weaver and Hugh Jackman, “Chappie” will also be available in Collectible Digibook Packaging.

The DVD version will include theFeaturette “We Are Tetravaal”, in which Sigourney Weaver, Hugh Jackman and Dev Patel discuss their characters and share their on-set experiences.

The Blu-Ray version will include the same featurette, but will further come with a host of additional bonus features, such as an Alternate Ending and the Extended Scene “A Very Bad Man”.

An additional eight Featurettes will be found on the release, including “Chappie: The Streetwise Professor”, which offers an inside look at Chappie and casting Copley to play the robot and his performance via motion capture.

In “Arms Race: The Weapons and Robots” you will get a deeper look at the real-world firepower tech and the design of the “Scout” robots & “Moose,” while “Bringing Chappie to Life: The Visual Effects” allows the film’s VFX artists to discuss the pre-production design process.

“From Tetra Vaal to Chappie” is an in-depth exploration of the scriptwriting process, the early concept design work and other aspects of pre-production, and “Keep It Gangster” is a behind-the-scenes look at the process of creating an authentic South African gangster world featuring interviews with NINJA and ¥O-LANDI VI$$ER.

And then there is “The Reality of Robotics” allowing you to discover present day robotics capabilities and next generation artificial intelligence, featuring an interview with Robotics Professor Wolfgang Fink. The final featurette is “Jozi: Real City and a Sci-Fi Setting” for you to discover the history of the real world locations in the film and the role these setting played in the fictionalized version of Johannesburg.

Also included on the disc is “Rogue Robot: Deconstructing the Stunts & Special Effects” and the Photo Gallery “The Art of Chappie”.

Available in a collectible digibook packaging, the Blomkamp3 Limited Edition Blu-ray Collection will include all three of director Neill Blomkamp’s films, along with a 64-page Booklet featuring artwork and notes from all three films.