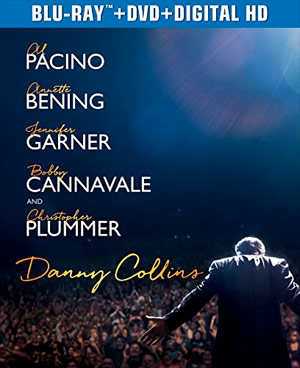 Universal Pictures Home Entertainment is delivering a destiny-changing letter that sends an aging rock star on a transformative journey in Bleecker Street’s Danny Collins, a heartfelt comedy inspired by a true story, that will arrive on Blu-Ray Disc and DVD in June.

Acclaimed writer and director Dan Fogelman tells the heartwarming story of rock icon Danny Collins (Al Pacino).  After a lifetime at the top of the music charts, Collins just can’t give up his hard-living ways. But when he receives a never-delivered letter written to him 40 years earlier by John Lennon urging him to stay true to his heart, Danny embarks on a quest to try to rediscover his family, his talent and the love he abandoned on his way to success.

“Danny Collins” will contain the feature film, along with a Behind-the-scenes Featurette and a Danny Collins – Album Covers Through the Years Gallery.

Prepare to get your copy of this inspiring and touching look at a man trying to reconnect with his dreams on June 30 when the film arrives in stores with a $34.98 sticker price for the Blu-Ray/DVD + DigitalHD version and $19.99 on DVD.