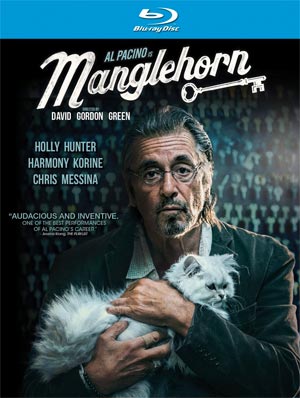 Independent publisher IFC Entertainment has revealed information about the upcoming release of Mangelhorn, a poignant drama starring Al Pacino and Holly Hunter, scheduling the film on Blu-Ray Disc and DVD in October.

Reclusive small-town Texas locksmith A.J. Manglehorn (Al Pacino) has never quite recovered from losing the love of his life, Clara. Fixated on her memory, he feels closer to his beloved cat than the people around him and prefers to find comfort in his work and daily routine. He has closed himself off from the world and watches as the world moves on without him.

Still, he forges on with his tenuous human connections, maintaining intermittent contact with his son (Chris Messina), taking misplaced pride in a former protégé gone astray (Harmony Korine), and establishing a cautious friendship with a kindhearted, lonely woman from the local bank (Holly Hunter). As this solitary man approaches the possibility of new love, he finds himself at a crossroads between staying mired in the past and embracing the present.