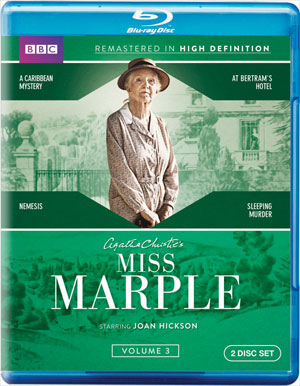 BBC Home Entertainment has expanded its release line-up by adding Miss Marple: Volume 3 for release on Blu-Ray Disc and DVD in June.

Never one to sit idle, Miss Marple finds her luxurious Barbados vacation a bit dull until Major Palgrave’s murder turns it into A Caribbean Mystery. Her London stay seems a bit too perfect until she discovers something sinister behind the Edwardian façade At Bertram’s Hotel. How can Miss Marple resist visiting the seaside villa of a young couple plagued by terrifying memories of a Sleeping Murder? And how will she solve an unspecified crime in Nemesis, when her only clue is a ticket for a tour of historic homes and gardens, pre-paid by a dead man?

For its high definition debut the original film elements of these episodes have been completely remastered in high definition, making sure the show will as best as possible.