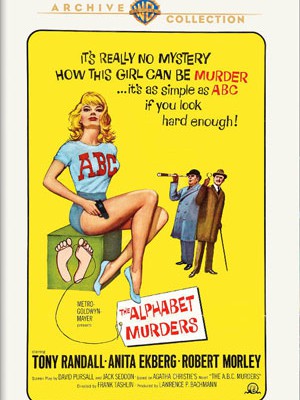 Warner Brothers Home Entertainment has just added a new round of movies to its made-to-order Warner Archive Collection, and adds lots of laughs to the brain-teasing tale of a serial killer who chooses his/her victims in alphabetical order with The Alphabet Murders, which is available now.

With a twinkle of his eye and a twirl of his moustache, Tony Randall steps into the patent leather pumps of Hercule Poirot – and joins the ranks of Charles Laughton, Albert Finney, Peter Ustinov, David Suchet and more distinguished actors who’ve charmed generations of audiences as Agatha Christie’s renowned Belgian detective.

“The Alphabet Murders,” based on Christie’s novel “The ABC Murders,” adds lots of laughs to the brain-teasing tale of a serial killer who chooses his/her victims in alphabetical order. As quickly as you can say ABC, Poirot is on the case, pursuing gorgeous Amanda Beatrice Cross (Anita Ekberg), who confesses to the crimes in Poirot’s Turkish bath. Poirot is shocked. After all, the ladies have their own facility elsewhere in the building! A befuddled British Intelligence officer (Robert Morley) galumphs along in Poirot’s wake. And Margaret Rutherford and Stringer Davis of the Miss Marple movie series make surprise cameos to add even more fun to the mysterious goings-on.

The release is presented in its original 1.78:1 widescreen aspect ratio in an anamorphic transfer with its original mono audio track. No bonus materials are part of the release, however.

“The Alphabet Murders” is now available in the Warner Archive Collection for $21.99.