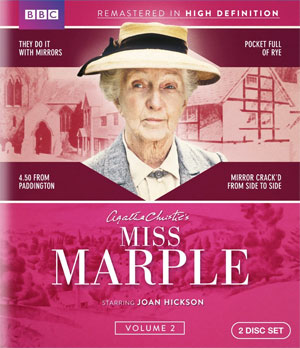 BBC Home Entertainment has lovingly restored the iconic Joan Hickson Miss Marple series from the original film elements in high definition to great acclaim, and is now preparing the second batch of the show for release on Blu-Ray Disc and DVD in March.

In “They Do It with Mirrors,” a country-house murder happens right under Miss Marple’s nose, leaving the amateur detective to figure out how the crime happened. In “The Mirror Crack’d from Side to Side,” the sleuth must determine who the intended victim of the poisoned cocktail that killed Heather Badcock actually was. Miss Marple also puts her skills to work when a woman is murdered on a train in “4.50 from Paddington,” and when a nursery rhyme comes to life in a horrifying way in “A Pocketful of Rye.”

The release will also include “A Very British Murder, Part 2: Detection Most Ingenious,” the second installment of a three-part series documenting the British national obsession with murder mysteries.