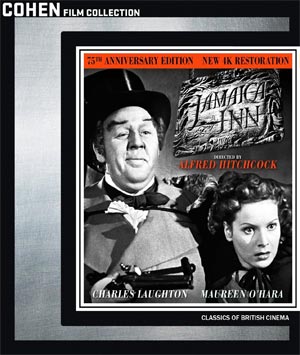 The Cohen Film Collection has just announced a restored edition of Alfred Hitchcock’s 1939 period adventure Jamaica Inn for release on Blu-Ray Disc and DVD in May.

Hitchcock’s visually inventive film, seen for years in substandard prints and home video releases, has been fully restored in 4K in collaboration with the British Film Institute from an archival picture negative. “Jamaica Inn” was Hitchcock’s last prewar film and the last from his great English period before he went to Hollywood. It was his first of three films based on the work of Daphne du Maurier, to be followed by “Rebecca” and “The Birds.”

“Jamaica Inn” is a dark drama set along England’s rocky Cornish coast in the 1820s, a time of lawlessness on sea and land. A newly orphaned young Irish woman, Mary (played by 18-year-old Maureen O’Hara), arrives at the tavern of the title, seeking her Aunt Patience (Marie Ney), who runs the inn with her husband, Joss (Leslie Banks).

Mary soon discovers that the inn is the hideout of a gang of pirates who cause ships to crash on the reefs, then steal their cargo and kill their crews. Looking to stop this evil practice, Mary turns for help to the local magistrate, Sir Humphrey Pengallan, wickedly played by Oscar winner Charles Laughton. Little does she know that her efforts will lead her down a path filled with murder and betrayal.

In addition to the movie itself, the release will also include a Commentary Track by movie critic Jeremy Arnold, as well as a new Video Essay by Alfred Hitchcock-biographer Donald Spoto. The release is rounded out by the movie’s 2014 Re-release Trailer.