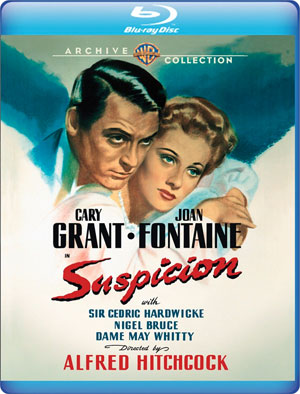 Fans of classic movies will rejoice at the fact that Warner Brothers Home Entertainment is bringing Alfred Hitchcock’s 1941 thriller, Suspicion to Blu-Ray as part of the Warner Archives.

One of suspense-master Hitchcock’s most sublime confections, this “did-he-do-it” pairs Joan Fontaine with Cary Grant for a fantastic result. Fontaine plays a bookish heiress on her way to early spinsterhood, while Grant is a penniless rogue who charms his way into her heart and manse. But as the glow of instant ardor fades, our young heiress fears she has taken more than a rogue to her bed… Her greatest nightmare? That she loves him so much, she may not care that he is a monster.

The release is presented in a new 1080p high definition transfer and also includes the Making-of Documentary ”Before the Fact: Suspicious Hitchcock” and the movie’s Theatrical Trailer.

“Suspicion” is available in the Warner Archives now for only $21.99.