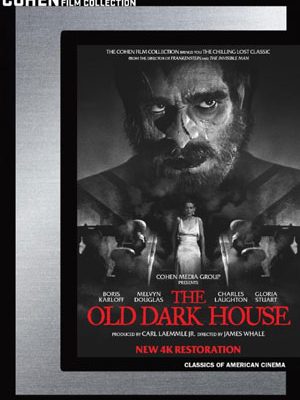 Fans of classic horror movies have long cherished James Whale’s 1932 horror satire The Old Dark House but the film has been elusive in recent years. Cohen Media Group has now scheduled a Blu-Ray Disc version of the movie for release just before Halloween.

A quintessential dark and stormy night brings a group of travelers to a forbidding mansion in the Welsh countryside, where they find themselves at the mercy of the strange, and possibly dangerous, Femm family. Boris Karloff is, as always, unforgettable, here playing a mute, menacing butler. The superb cast also includes Gloria Stuart, who would star in James Cameron’s Titanic 65 years later, Melvin Douglas (Ninotchka, Being There), Charles Laughton (in his first Hollywood film), Raymond Massey (Abe Lincoln in Illinois, East of Eden) and Ernest Thesiger (Bride of Frankenstein).

Based on J.B. Priestley’s popular novel Benighted, this legendary classic was directed by James Whale in the fertile period between his Frankenstein and Bride of Frankenstein and he puts a surprising spin on horror film conventions even as he is creating them, adding black humor and sexual perversity that was eye-opening in 1932.

Aside from the movie itself that is presented in a dazzling new 4K digital restoration, the release also comes with a number of bonus features, such as a New Interview with Boris Karloff’s daughter Sara, and the Featurette ”Curtis Harrington Saves The Old Dark House”.