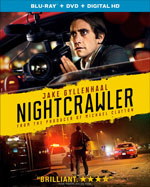 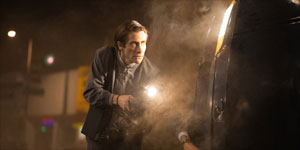 Viewers who complain that today’s Hollywood pales by comparison to that of the 1970s would be well served to check out writer-director Dan Gilroy’s “Nightcrawler,” a kind of mash-up of “Taxi Driver” and “Network” that also goes off in its own fascinating, original directions. Like those films and other beloved classics of the ’70s, “Nightcrawler” succeeds because of its utter fearlessness when it comes to presenting an unpleasant but all too realistic (and all too relentless) character—as played by Jake Gyllenhaal, Lou Bloom is a sociopathic protagonist who not only invites but earns comparison with Travis Bickle and Rupert Pupkin. 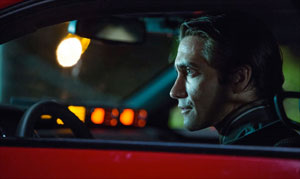 Bloom is a small-time criminal who hits the big time when he discovers the subculture of nightcrawlers who patrol late-night Los Angeles: insomniacs armed with digital video cameras who listen in on police scanners and rush to the scenes of accidents and crimes in the hope of getting the bloodiest possible footage to sell to local news stations. After a slightly bumpy start, Bloom takes to his new career as a nightcrawler like a fish to water, skillfully seeking out—and ultimately helping to create—the carnage that his boss and crush, news producer Nina (Rene Russo), craves. 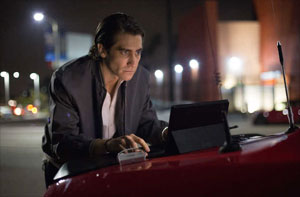 Gilroy establishes this premise clearly and concisely and then rides it for all it’s worth, using Lou’s saga as a metaphor for unrestrained capitalism at its most merciless; everything in “Nightcrawler” has a price, and everything is open to negotiation. Yet unlike “Network,” this isn’t a particularly angry film; Gilroy doesn’t have an axe to grind, and his movie is more observational than critical. (He has said in interviews that he doesn’t think there’s a better system than capitalism, but that doesn’t mean it doesn’t have its problems, which he exposes unblinkingly here.) If anything, the villain is off screen: it’s us, the audience that has created the demand for the “if it bleeds, it leads” material Nina cherishes. 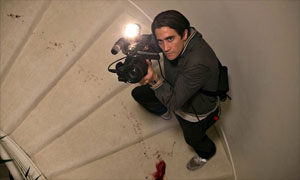 As played by Gyllenhaal, Lou Bloom is both absolutely terrifying and surprisingly recognizable; it’s an all-time great performance, and it’s nearly matched by Russo as the tough but desperate Nina. One of the movie’s major achievements is to make these characters serve as universal metaphors yet also work as extremely specific individuals – individuals given an even more specific context via Robert Elswit’s glorious nighttime cinematography that showcases Los Angeles to a degree that recalls Michael Mann’s “Heat” and Walter Hill’s “The Driver.” 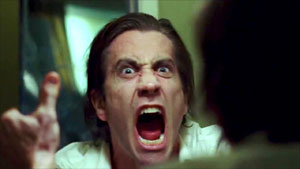 That cinematography is well served by the terrific high-definition transfer on Universal’s Blu-Ray Disc of “Nightcrawler,” which preserves the rich blacks of Elswit’s night exteriors as well as the vivid primary colors and bright lights that punctuate the darkness: the streetlights, signs and advertisements, and fluorescent pockets of light glimpsed through the windows of all-night restaurants and convenience stores. The movie has a wide tonal range with strong contrasts, all of which are captured here without flaw.

The DTS-HD 5.1 sound mix is equally powerful, immersing the audience in Gilroy’s nightscapes with rich, layered effects and a clear, crisp presentation of the film’s consistently quotable dialogue. 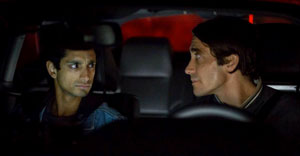 The disc also boasts an indispensable commentary track by Gilroy and his primary collaborators, who also happen to be his brothers: producer Tony and editor John. Together they take the listener on an informative journey through every stage of pre-production, shooting, and editing on “Nightcrawler,” explicating the themes and intentions behind the film with humor and intelligence.

The only other supplement is a relatively frivolous five-minute featurette, which feels like a pointless afterthought given the comprehensive audio commentary. It does feature a few quotes from real-life nightcrawlers, however, which indicate that Gilroy’s nightmarish satire is less exaggerated than one might at first assume.