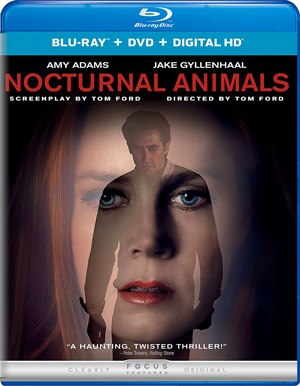 Universal Pictures Home Entertainment has just added Nocturnal Animals to its line-up, scheduling a Blu-Ray Disc and DVD version for release in February.

In the haunting romantic thriller of shocking intimacy and gripping tension, Susan (Amy Adams) is in an unfulfilling second marriage when she receives a package containing a manuscript from her ex-husband, Edward (Jake Gyllenhaal). Moved by Edward’s writing, Susan cannot help but reminisce over the most private moments from her own love story with the author. Trying to look within herself and beyond the glossy surface of the life and career that she has made, Susan increasingly interprets the book as a tale of revenge, a tale that forces her to re-evaluate the choices that she has made, and re-awakens a love that she feared was lost – as the story builds to a reckoning that will define both the novel’s hero and her own.

Aside from the feature film itself, the release will also contain a Mutli-part Featurette covering a variety of aspects of the movie’s production. Called ”The Making of Nocturnal Animals”, it shows Amy Adams, Jake Gyllenhaal, Tom Ford, and cast and filmmakers recount how they brought such a unique story to life in segments, such as ”Building the Story”, where Tom Ford and actors examine central characters and how they fit into the story, ”The Look of Nocturnal Animals”, in which the filmmakers and cast discuss how the cinematography by Seamus McGarvey and costumes by Arianne Phillips give the film such a distinct and rich feel.
In the segment ”The Filmmaker’s Eye: Tom Ford”, experience how Tom Ford’s attention to detail adds layers to the interwoven stories at the center of the film.