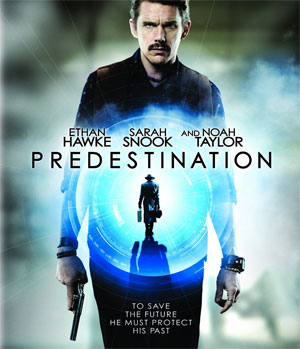 Based on the short story “All You Zombies” by Robert A. Heinlein, “Predestination” chronicles the life of a Temporal Agent (Ethan Hawke) sent on an intricate series of time-travel journeys designed to ensure the continuation of his law enforcement career. Now, on his final assignment, the Agent must recruit his younger self while pursuing the one criminal that has eluded him throughout time.

The release will also include Outtakes and the Featurette “A Journey Through Time”, offering up a behind-the-scenes look with star Ethan Hawke, as well as the Ten-Part Documentary “All You Zombies: Bringing Predestination to Life”, featuring “Introduction, “Casting,” “Pre-Production,” “Photography: Weeks 1, 2, 3, 4, 5 and 6” and “Post Production.”