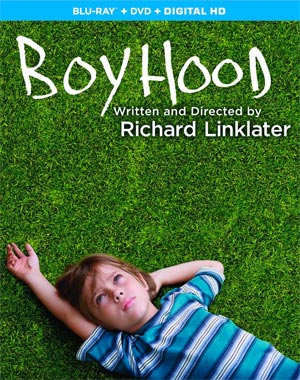 Filmed over the course of 12 years with the same cast, “Boyhood” is a groundbreaking story of growing up as seen through the eyes of a child named Mason.  A box office hit from IFC Films that has garnered universal critical acclaim, “Boyhood” achieved a rare 99% Certified Fresh rating on Rotten Tomatoes, earned an unprecedented score of 100 on Metacritic and is the first film to receive an A+ score from Entertainment Weekly’s Critical Mass.  The film stars Academy Award® nominee Ethan Hawke, Patricia Arquette, Lorelei Linklater and Ellar Coltrane as Mason.

The DVD version of the movie is a bare-bones release, featuring only a widescreen presentation of the film, enhanced for 16:9 televisions with 5.1 Dolby Digital audio.

The Blu-Ray version offers a 1080p high definition presentation with English 5.1 DTS-HD Master Audio. In addition it will contain the Featurette ”The 12 Year Project” and a Q&A with Richard Linklater and the Cast.