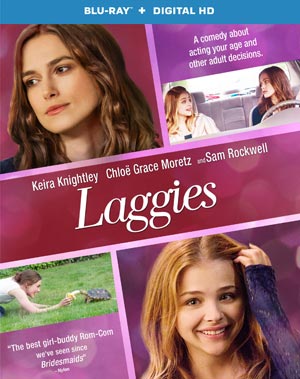 Keira Knightley teams up with Chloë Grace Moretz and Sam Rockwell in the heartwarming, coming-of-age comedy Laggies, that Lionsgate Home Entertainment has scheduled for release in February.

“Laggies” is the feel-good comedy about two unlikely friends: Megan (Keira Knightley), a 28-year-old who’s not ready for adulthood, and Annika(Chloë Grace Moretz), a 16-year-old who wonders if there’s life after high school. Panicked after her boyfriend proposes, Megan hides out in the house Annika shares with her single dad (Sam Rockwell). As their paths intertwine in surprising and hilarious ways, Megan and Annika help each other to stop lagging…and start living!

The release will feature movie itself, along with a Commentary Track by director Lynn Shelton. In addition, you will find Deleted Scenes and the Featurettes ”Lagging On with Lynn Shelton” and ”Shooting Seattle: The Look of Laggies”.