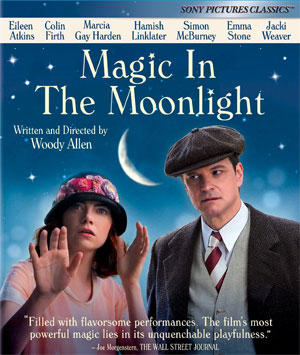 Sony Pictures Home Entertainment is preparing Woody Allen’s latest movie, set in the 1920s against the beautiful and opulent Cote d’Azur in the south of France, Magic in the Moonlight for release, bringing the charming film to Blu-Ray and DVD in December.

Acclaimed magician Stanley Crawford (Colin Firth), has dazzled audiences across Europe with feats of supernatural amazement. But when it comes to explaining the inexplicable, Stanley is a dedicated skeptic. Enter Sophie Baker (Emma Stone), psychic, soothsayer, and stunning seductress. As Stanley and Sophie embark on misadventures up and down the French Riviera, will they discover proof of a world beyond the laws of physics or have they fallen under the sway of a more earthly chemistry?

Woody Allen pulls the strings with masterful precision in this enchanting romantic comedy that explores the realm between what is understood in our minds and what is known in our hearts.

The release for Woody Allen’s latest movie will also offer up the Featurette “Behind the Magic”, which offers fans a peek inside the film’s production. Also included is “On the Red Carpet: Los Angeles Film Premiere”, that features interviews with the film’s stars upon arrival at the Los Angeles premiere.

“Magic in the Moonlight” has been scheduled for release on December 16 with a $34.99 sticker price for the Blu-Ray version and $29.98 on DVD.