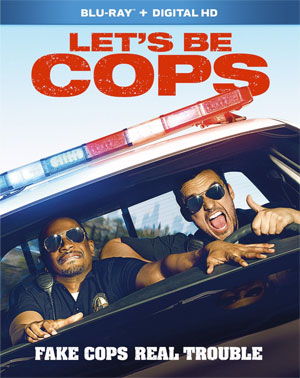 The comedy Let’s be Cops will make it to Blu-Ray Disc and DVD from Twentieth Century Fox Home Entertainment this November.

When two struggling pals dress as police officers for a costume party, they become neighborhood sensations.  But when these newly-minted “heroes” get tangled in a real life web of mobsters and dirty detectives, they must put their fake badges on the line.

Aside from the R-rated movie itself in anamorphic widescreen with Dolby Digital 5.1 audio, the DVD version release will also come with a Commentary Track by director Luke Greenfield, as well as a second Commentary Track by writer Nicholas Thomas. You will also find the Theatrical Trailer and a Still Gallery on the disc.

The Blu-Ray version features the film in 1080p high definition with a DTS 5.1 HD Master Audio track, and will also include the commentary tracks and other features from the DVD. In addition, it will contain a selection of Deleted and Alternate Scenes, as well Camera Tests and the Featurette ”Real Funny”.