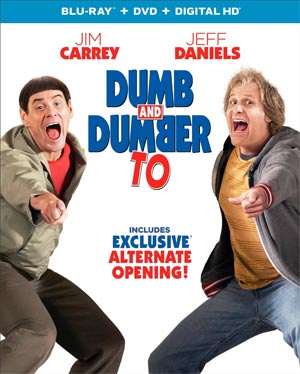 Universal Home Entertainment is sending Lloyd and Harry back into the ring in the new year, as the studio just scheduled Dumb and Dumber To for release as a Blu-Ray Combo Pack and a DVD for February.

Jim Carrey and Jeff Daniels reprise their signature roles as Lloyd and Harry in the sequel to the smash hit that took the physical comedy and kicked it in the nuts: Dumb and Dumber To. The original film’s directors, Peter and Bobby Farrelly, take Lloyd and Harry on a road trip to find a child Harry never knew he had and the responsibility neither should ever, ever be given.

The DVD version will also include the Making-of Featurette “That’s Awesome!”.

The Blu-Ray version will offer up a lot more supplements, such as an Alternate Opening, Deleted & Extended Scenes and a hilarious Gag Reel.

In addition, it will also come with the Making-of Featurette “That’s Awesome!” and ”What’s So Smart About Dumb and Dumber To”.