In their line of Scream Factory titles, Shout! Factory will release Clive Barker’s Nightbreed on DVD and Blu-Ray Disc this October, finally unleashing the highly sought-after Director’s Cut of the film, and this morning the studio sent over final details and specs for the exciting release.

Boone (Craig Sheffer) may be a troubled young man, but his troubles are just beginning. Set up as the fall guy in a string of slasher murders, he decides he’ll hide by crossing the threshold that separates “us” from “them” and sneak into the forbidden subterranean realm of Midian.  Boone will live among the monsters. Hellraiser creator Clive Barker writes (adapting his novel Cabal) and directs this vivid leap into horror that asks: in the battle of man vs. monster, who’s really the monster? The answer supplies flesh-crawling suspense, sudden fear, a colorful Danny Elfman score and a creepy array of shape-shifting beings. They are the Nightbreed, denizens of a world beyond death, beyond the imagination, perhaps beyond anything you’ve seen.

Featuring a newly designed cover artwork, the release will be available as a Limited Edition Blu-Ray version, as well as a Special Edition Blu-Ray and DVD version, but more importantly, this release offers up a completely new Director’s Cut of the movie.

Here is what Clive Barker’s office has to say about it: The “Nightbreed Director’s Cut” is an entirely different film than the one which was released in theaters. Its 20 minutes longer than the theatrical cut, but it contains over 40 minutes of new and altered footage. Clive oversaw the reconstruction and edit himself, personally ensuring that, at long last, he was able to tell the story he always wanted to tell, but until now, had never been given the chance. Once the scenes were reordered, and the original film footage restored, the entire film received a brand new sound mix and color pass. It is, in every way, a different movie. It contains more story, more monsters, and there’s even a musical number. Ultimately, what we’ve delivered is a love story 25 years in the making.

The movie will be released as a strictly Limited Edition 3-Disc Blu-Ray Set with only 10,000 numbered copies available. This edition will include the Director’s Cut presentation of the film which contains over 40 minutes of new and altered footage, with a DTS 5.1 HD Master audio track. It will also include an Introduction by writer/director Clive Barker and restoration producer Mark Alan Miller, as well as a Commentary Track by Clive Barker and Mark Alan Miller. 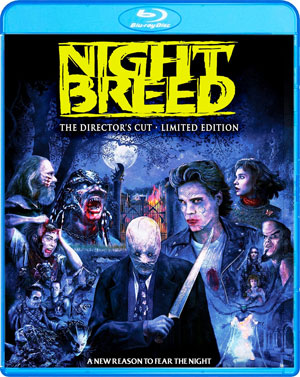 Also included is the 72-minute Documentary ”Tribes of the Moon: The Making of Nightbreed” featuring interviews with Craig Sheffer, Anne Bobby, Doug Bradley and more…, as well as the 42-minute Documentary ”Making Monsters”, offering up interviews with makeup effects artists Bob Keen, Martin Mercer and Paul Jones. Look also for ”Fire! Fights! Stunts! 2nd Unit Shooting” and a selection of Deleted and Alternate Scenes.
More interviews await you in ”Monster Prosthetics Master Class” and ”Cutting Compromise” featuring an interview with editor Mark Goldblatt. ”The Painted Landscape” gives you access to the concept art of Ralph McQuarrie. Matte Painting Tests, Makeup Tests and Stop Motion Lost Footage are also included, as well as an Extended Torture Scene and the Rehearsal of Boone’s dream. Extensive Still Galleries and the Theatrical Trailer are also included.
On a separate disc, this release will also include the movie’s Theatrical Cut, taken from a new interpositive transfer.

In addition, “Nightbreed” will also be available as a Blu-Ray/DVD Combo Special Edition, featuring the new Director’s Cut, along with the Introduction and Commentary Track by Clive Barker and Mark Alan Miller.
”Tribes of the Moon: The Making of Nightbreed,” “Making Monsters” and ”Fire! Fights! Stunts! 2nd Unit Shooting” will also be included in this version, along with the movie’s Original Theatrical Trailer.