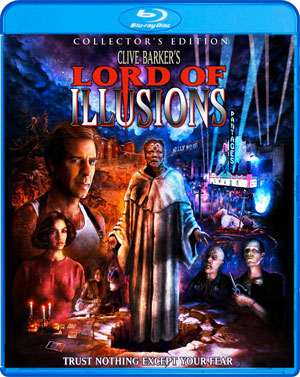 Clive Barker’s Lord of Illusions is one of the latest Blu-Ray titles that Shout! Factory has added to their release line-up, as part of their Scream Factory label, releasing the lurid horror film as a Collector’s Edition on Blu-Ray in December.

From best-selling author and celebrated director Clive Barker comes a supernatural thriller that rips apart the boundaries between sanity and madness, and between the art of illusion and the terrifying forces of magic.

Scott Bakula (Quantum Leap) portrays Harry D’Amour, a private detective visiting Los Angeles on a routine investigation. Harry gets more than he bargains for when he encounters Philip Swan (Kevin J. O’Connor, The Mummy), a performer whose amazing illusions captivate the world. But are they really illusions? Harry isn’t so sure as he is thrust into a nightmare of murder, deception and terrifying assaults from the dark beyond. Famke Janssen (X-Men, Taken, Hemlock Grove) and Daniel von Bargen (Crimson Tide, The Faculty) also star.

Arriving as a 2-disc Collector’s Edition, no details have been announced yet as to any bonus materials that might be included in the release, but we will keep you posted as more information comes in, of course. As you can see from the packaging, Scream Factory has once again created brand new cover artwork for the film, giving it a bold, fresh look. However, for all fans who prefer the movie’s original cover artwork, a reversible packaging inlay is provided that features the new artwork on one side and the original artwork on the flip-side.

“Lord of Illusions: Collector’s Edition” has been scheduled for release on December 16 and will carry a $29.98 sticker price.