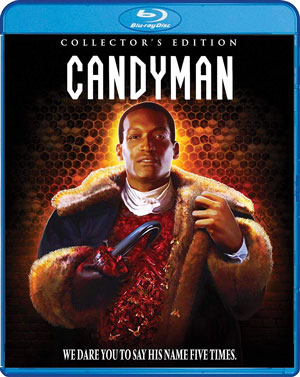 The myth of Candyman has endured for generations. He legacy is eternal rage. This gut-wrenching thriller follows a graduate student whose research summons the spirit of the dead! When Helen Lyle hears about Candyman, a slave spirit with a hook hand who is said to haunt a notorious housing project, she thinks she has a new twist for her thesis. Braving the gang-ridden territory to visit the site, Helen arrogantly assumes Candyman can’t really exist … until he appears, igniting a string of terrifying, grisly slayings. But the police don’t believe in monsters and charge Helen with the crimes. And the only one who can set her free is Candyman.

Arriving as a 2-disc set, the release will feature a new 2K restoration from a new 4K scan of the original negative, supervised and approved by writer/director Bernard Rose and director of photography Anthony B. Richmond, along with two new Commentary TRacks. the first will feature writer-director Bernard Rose and actor Tony Todd. while the second one provides insight by authors Stephen Jones and Kim Newman.
In addition, previously released Commentary Tracks with director Bernard Rose, author Clive Barker, producer Alan Poul and actors Tony Todd, Virginia Madsen and Kasi Lemmons and one with director Bernard Rose, from The Movie Crypt Podcast hosted by filmmakers Adam Green and Joe Lynch will also be included.
Also included are interviews with Clive Barker, Tony Todd, along with the Interview Featurette Sweets to the Sweet: The Candyman Mythos, featuring interviews with director Bernard Rose, producer Alan Poul, executive producer Clive Barker, actors Virginia Madsen, Tony Todd and Kasi Lemmons.
The first disc will be rounded out by Bernard Rose’s Storyboards, Theatrical Trailer, TV Spots and a Still Gallery.
On the second disc of the set you will find a newly restored version of the Unrated Cut of the movie, with high definition inserts for the uncut footage from an archival film print.
You will also find additional interviews on this disc, including separate conversations with Tony Todd, Virginia Madsen, Kasi Lemmons, and DeJuan Guy, as well as production designer Jane Ann Stewart, special makeup effects artists Bob Keen, Gary J. Tunnicliffe, and Mark Coulier.
In A Story to Tell: Clive Barker’s “The Forbidden”, writer Douglas E. Winter talks about Clive Barker’s seminal Books of Blood and Candyman’s source story, “The Forbidden”, and Urban Legend: Unwrapping Candyman is a Critical Analysis Of The Film With Writers Tananarive Due And Steven Barnes.
This Collector’s Edition of Candyman will be in stores on November 20, so make sure to pre-order your copies now!