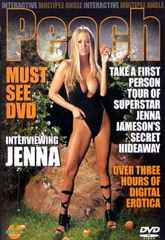 "Interviewing Jenna" is a release sounds promising, so we decided to take a look. The story of the release puts you into the shoes of an interviewer visiting Jenna Jameson’s mansion. (Note: Don’t be fooled. The mansion in the film that rivals the Playboy Mansion is not Jenna’s real home but a mere location to create the high class-style for the release.) There, viewers meet some of her entourage and in an interactive manner the viewer can select whether he would like to approach these girls or whether he would like to follow Jenna. If you begin talking to any of the other girls, they will quickly get into Striptease-mode and then send you back on the way with Jenna. In the end, Jenna herself will undress for you as the "interview" comes to a conclusion. All girl-scenes are available in multi-angle presentations, giving you immediate control over three slightly differing viewpoints. One of them is typically medium shot, while the other two are set up much closer from different angles.

"Interviewing Jenna" is surprisingly restrained, really. Although there is a lot of frontal nudity, the feature consists entirely of a few girls undressing and spreading in a number of locations. There is no couple sex or other sexual activities for that matter.

If you’re familiar with other adult releases, the first thing you will find surprising is the lack of bonus features on this release. The DVD contains the feature presentation and that’s about it. Only direct-access to the scenes/girls is available from the menus, but if you were hoping of clips and trailers for other Peach releases, you’re simply out of luck.
However, one thing that is also immediately noticeable is the image quality. The transfer is of the highest quality, free of noise or grain, and without compression artifacts. Since the feature presentation itself is not very long – though presented in a multi-angle fashion – no room on the disc is wasted by all the supplements, making it possible to use a fairly high bitrate for the video stream. The video artifacts often found in adult releases are similarly non-existent and colors are rich and stable without any signs of bleeding. Blacks are deep and help create a look that is rich and has good visual depth.

The audio is also well reproduced on the DVD, though none of the girls is an actress of any sorts, so don’t expect any quality performances here. Even Jenna’s own performance is so stilted that I believe a few acting lessons would actually pay off.