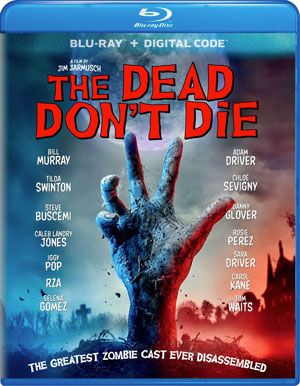 In the sleepy small town of Centerville, something is not quite right. The moon hangs large and low in the sky, the hours of daylight are becoming unpredictable and animals are beginning to exhibit unusual behavior. No one foresees the strangest and most dangerous repercussion that will soon start plaguing the town: The Dead Don’t Die – they rise from their graves and savagely attack and feast on the living – and the citizens must battle for their survival.

Also look for bonus materials on the release, such as the Featurette Bill Murray: Zombie Hunting Action Star, in which Bill Murray discusses his fear of being typecast as an action hero.

Also included is Behind-the-Scenes of The Dead Don’t Die, a collection of behind the scenes moments from the movie set, as well as Stick Together, in which Jim Jarmusch’s frequent collaborators talk about his filmmaking style, and what makes The Dead Don’t Die stand out from other zombie films