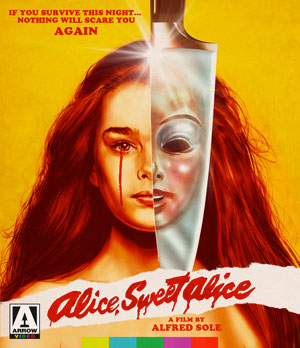 Arrow Video has unveiled details about the upcoming release of Alice, Sweet Alice, as they schedule to bring the Hitchcockian thriller to Blu-Ray Disc next week.

A young Brooke Shields meets an untimely end in this religious-themed proto slasher par excellence from director Alfred Sole. On the day of her first communion, young Karen (Brooke Shields) is savagely murdered by an unknown assailant in a yellow rain coat and a freakishly creepy translucent mask. But the nightmare is far from over—as the knife-wielding maniac strikes again and again, Karen’s bereaved parents are forced to confront the possibility that Karen’s wayward sister Alice might be the one behind the mask. Bearing influences from the likes of Hitchcock, the then-booming Italian giallo film and more specifically, Nicolas Roeg’s Don’t Look Now, Alice, Sweet Alice is an absolutely essential—if often overlooked—entry in the canon of 1970s American horror.

As always, Arrow Video is releasing the film with a host of bonus features, and a brand new 2K restoration of the theatrical version from the original camera negative with uncompressed audio.

A brand new Commentary Track by Richard Harland Smith will be included, along with an Archival Audio Commentary with co-writer/director Alfred Sole and editor Edward Salier.

In the Featurette First Communion: Alfred Sole Remembers Alice, Sweet Alice, director Alfred Sole looks back on his 1976 classic, and in In the Name of the Father offers up a brand new interview with actor Niles McMaster.

The release is rounded out by the film’s Original Screenplay and an Image Gallery.