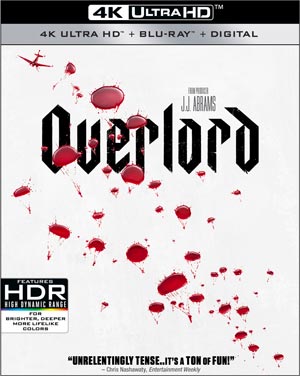 Paramount Home Entertainment has just added the action-packed thriller Overlord to its release line-up, scheduling a 4K UHD, Blu-Ray Disc and DVD version of the film for February.

Nothing can prepare you for the mind-blowing mayhem that is Overlord, an insanely twisted thrill ride about a team of American paratroopers who come face-to-face with Nazi super-soldiers unlike the world has ever seen.

Aside from the movie itself, Paramount is also adding the Multi-part Featurette The Horrors of War to the disc, consisting of the parts ”Creation,” “Death Above,” “Death on the Ground,” “Death Below,” “Death No More” and ”Brothers in Arms”.