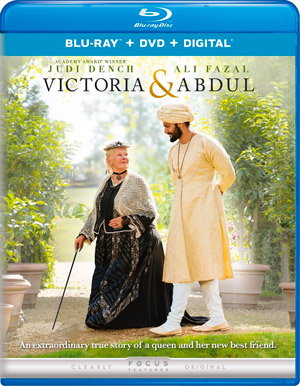 Universal Pictures Home Entertainment has added the heartwarming and uplifting story, Victoria & Abdul to its roster, bringing the film to Blu-Ray Disc and DVD in December.

Victoria & Abdul is the extraordinary true story of an unexpected friendship in the later years of Queen Victoria’s (Judi Dench) remarkable rule. When Abdul Karim (Ali Fazal), a young clerk, travels from India to participate in the Queen’s Golden Jubilee, he is surprised to find favor with the Queen herself. As the Queen questions the constrictions of her long-held position, the two forge an unlikely and devoted alliance with a loyalty to one another that the Queen’s inner circle attempts to destroy. As the friendship deepens, the Queen begins to see a changing world through new eyes and joyfully reclaims her humanity.

Aside from the feature film itself in which Queen Victoria finds unexpected companionship with a humble servant, the release will also include the Featurette Judi & Ali, allowing you to hear why Judi Dench and Ali Fazal were the perfect pair to portray the relationship of Queen Victoria and Abdul Karim, one of the most unique in history, on screen, and how they developed their own friendship while making the film.

In The Look of Victoria & Abdul, filmmakers, cast, and crew discuss how the authenticity of locations, costumes, and props contributed to the realism of the film.